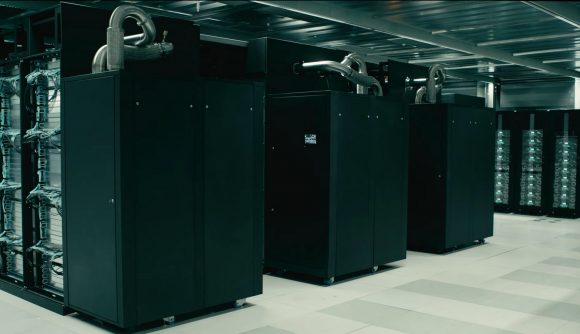 ‘Supercomputers’. All talk about their petaflops and applications for industry seems quite far removed from our day-to-day life, where even a gaming rig with one of the best graphics cards and best CPUs will pale in comparison to these behemoths. It makes you wonder exactly what one might look like if you could stand between the server racks and look side to side. Well, with AMD’s newly-launched 360 virtual supercomputer tour, you can do just this.

The supercomputer ‘Hawk’ is an Apollo system from Hewlett Packard Enterprise (HPE) and is “designed to advance applications in energy, climate, mobility, and health, with a peak performance of approximately 26 petaflops”. The supercomputer, based at the High-Performance Computing Center Stuttgart (HLRS) of the University of Stuttgart, Germany, uses 2nd Gen AMD EPYC processors to achieve this operational performance.

You can take the 360 virtual tour via the embedded player below, or by visiting the matterport site yourself. As you move around the facility, you’ll find links to more detail on the supercomputer. (You can also measure distances in the virtual environment, should you want to get a clear picture of its scale.)

Over the past year, AMD has dramatically increased its server market share, and it looks like the company is aggressively expanding its reach into the server-scale, supercomputer market with its line of EPYC processors. In 2021, Cray and AMD are set to launch the world’s fastest supercomputer – ‘Frontier’ – at 1.5 exaflops of performance.

Going back to the Hawk supercomputer for a moment, it might be handy to compare these compute core numbers to a single EPYC processor for scale, much as it’s handy to be given a 360 virtual tour for the facility’s physical scale. With 720,000 compute cores, and with 32 or 64 cores per EPYC processor (which should be the case if HPE hasn’t requested a different core layout), this means the supercomputer should host either 11,250 or 22,500 AMD Gen 2 EPYC processors.

Supercomputers like this one can be used for many different purposes, from academic research, to industrial weather forecasting, to military oceanography. This AMD/HPE Hawk supercomputer, in particular, will be used for “scientific and industrial computing in Europe”.