AMD has launched its first brand new graphics card architecture since Vega was dropped on the market almost two years ago, so now it’s time to see what it can do and overclocking AMD’s RX 5700 XT. The brand new Navi RDNA GPU design has been focused specifically on the needs of game engines over the compute-focus that AMD’s previous GCN architectures had made their goal.

So yay, we’ve got gaming graphics cards from the Radeon skunkworks tailored to our specific nerdy needs without the extraneous number-crunching chops the Vega GPUs were saddled with. And with Navi sighting improved single core performance over going wider and shoving in more cores, the new GPUs are delivering gaming performance that actually rivals their Nvidia enemies.

But Nvidia’s RTX 2070 Super is still the superior graphics card between it and the Radeon RX 5700 XT. It may be $100 more expensive, but that performance lead is something that both Nvidia and its fans will point to as proof that Team GeForce still has the edge. But the gap is only wafer thin, so can we make up the performance difference in-game with a little judicious overclocking? We have the technology…

Though, honestly, we don’t really need any more technology than just the fine-ass AMD RX 5700 XT, and the quality Radeon Adrenalin driver set that comes with it, to get a decent overclock on the new Navi silicon. And yes, we are praising AMD’s driver software. I’ll admit it’s not something we do very often, but the recent Adrenalin drivers have been pretty darned solid, and the WattMan monitoring and tweaking software works a treat.

Normally we’d go with the Rivatuner-based MSI Afterburner for all our overclocking needs, and we have indeed stuck with that for our Nvidia overclocking thanks to its Turing-happy OC Scanner functionality. But, to squeeze that extra little bit of gaming performance out of our RX 5700 XT to bring it up to RTX 2070 Super levels, the WattMan software has everything we need. 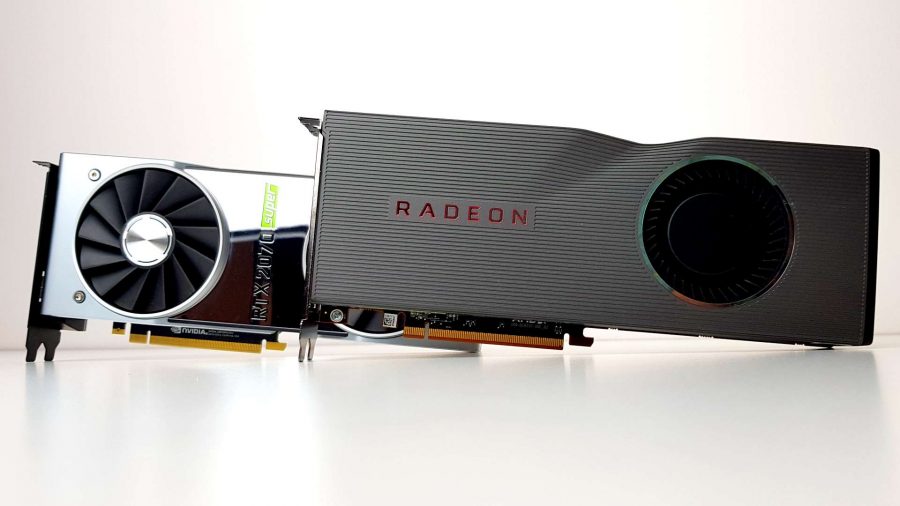 I have to say I was sceptical about just how much further we’d be able to push the Navi 10 GPU inside the XT. It’s chip has been cranked up to bat above its rated peak engine clock of 1,905MHz and the GPU gets hot as hell when it’s running at full speed. Traditionally that would be all you’d need to know to put the brakes on any potential overclocking extras you’d expect to get out of a new graphics card.

But with a mix of moar powerz over-provisioning, a GPU overclock, and a little light undervolting, we’ve been able to get our reference-clocked RX 5700 XT with its curvy blower cooler, to perform at the same gaming level as a stock RTX 2070 Super that costs $100 more. Lovely stuff.

And it’s all very easy. Just right-click on the desktop, bring up the Radeon driver software and dive into the gaming settings, and the WattMan tab. From here we’re able to whack the power limit up to +50% and then get down and dirty with Navi’s voltage/frequency curve. This is the simplest way to overclock and undervolt, pushing up the target GPU clock speed while driving down the voltage limit at the same time.

AMD has limited how far you can push the frequency, putting a hard 2,150MHz barrier in place, but our GPU wouldn’t run stably with the curve pointing above the 2,130MHz mark anyways. But in terms of the voltage we managed to get that right down from the 1,200mV max to 1,146mV, which makes a huge difference when it comes to keeping the Navi GPU’s temps in line. 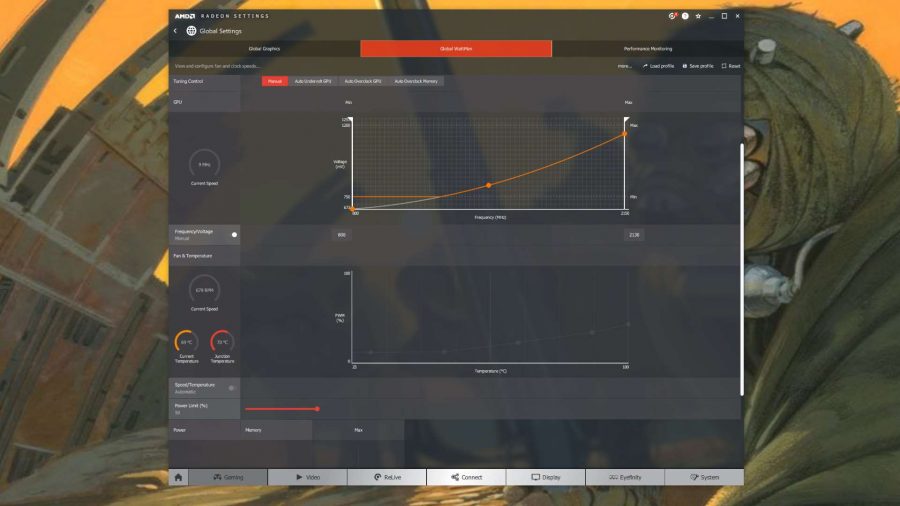 Of course with the higher clock speed frequency in place the GPU power draw goes up by quite a way, even with the chip undervolting going on. But the temperature only popped up by a solitary 1°C over the stock thermal performance, which is a good thing considering that curvy cooler has the card peaking at 87°C at non-overclocked frequencies.

So that’s all you need to do to get the RX 5700 XT up to the same performance as the much more expensive Nvidia RTX 2070 Super. How super. But what of the standard RX 5700, how well does that overclock? 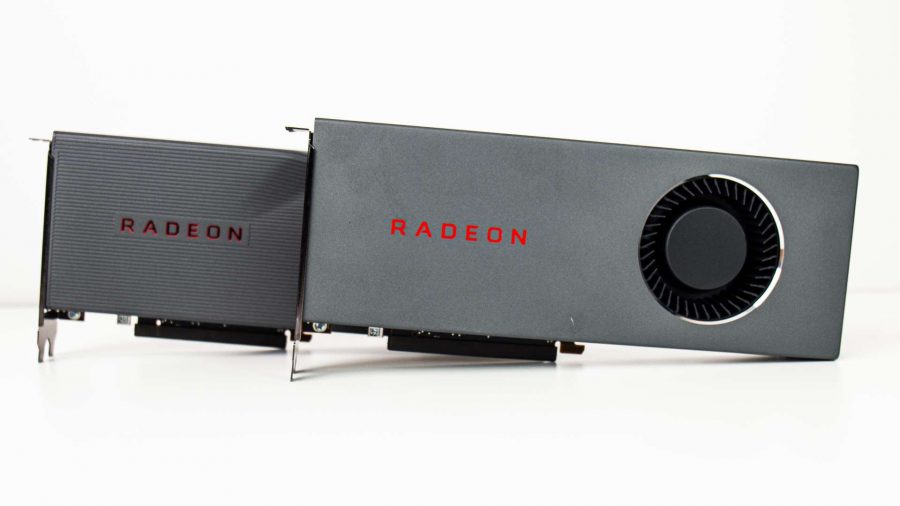 Honestly I had thought this would overclock like a dream, yet it’s not turned out that way. From the impressive stock performance of the lower-spec Navi GPU I thought there would be a fair chunk of overclocking headroom available. And there might be, but it seems AMD has limited the extent to which you can take the straight RX 5700. It’s possible future VBIOS patches might appear from the community side and unlock the full potential of the GPU, but right now it looks like it’s being kept under lock and key.

In WattMan, and in Afterburner, the RX 5700 has a hard limit on its GPU of just 1,850MHz, and only has the option to offer another +20% power to the system too. Our reference card happily took the max of both options and also allowed us to drop the voltage in WattMan down to just 1,046mV. This combined means that while you’re now mostly leaving the RTX 2060 Super in the dust, you’re not really getting any closer to the RX 5700 XT.

Which is likely by design. Where the RX 5700 XT is just another $50 more than the non-XT version AMD won’t want you to just twiddle a couple of knobs and be within touching distance of its fastest Navi GPU. So hobbling the overclocking opportunities would seem to be the way to go. It’s a shame, but again, the XT is only another $50 more, so realistically that’s the one we’d recommend. Just save up a little longer and go for that one. 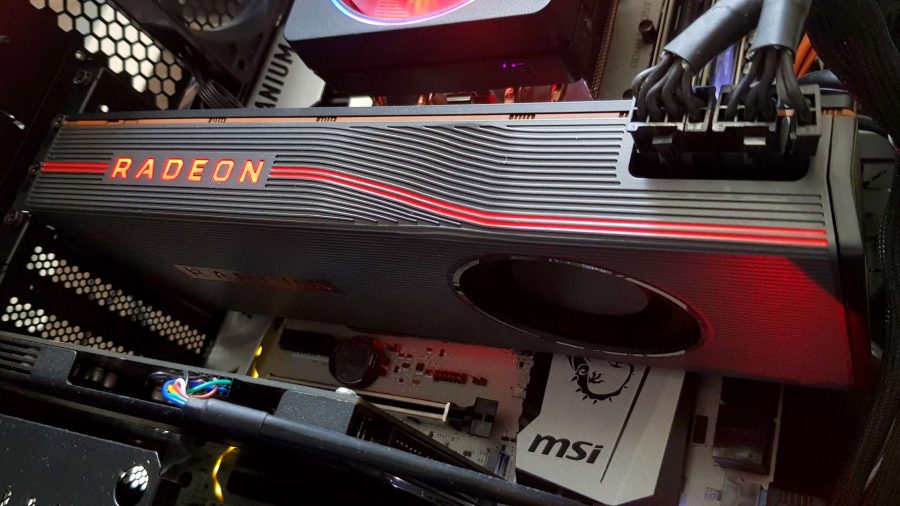 It does bear saying, however, that while we are able to push the RX 5700 XT up to the same performance levels as the RTX 2070 Super, that card itself has some handy overclocking headroom all of its own. And it’s even easier to access than with AMD and WattMan. Jump into Afterburner and use the OC Scanner feature and it will find what it thinks is the ideal frequency/voltage curve for you. And with that in place the Nvidia card once again takes the performance lead, but again only just.

Though it does still run much cooler and its 12nm GPU only draws a touch more board power than the 7nm Navi-based card.

But when we’re talking about a $399 card up against a $499 GPU you’ve got to take your hat off to the impressive RX 5700 XT. In fact, I’m running it overclocked in my office machine right now and it’s completely stable. Top work, AMD.

Join the conversation about RX 5700 XT overclocking and let us know how you get on via this article’s Facebook and Twitter threads.