After much speculation AMD has finally, officially, announced the Radeon RX 5500-series of graphics cards. This new generation of mainstream Navi GPUs will eventually completely replace the current Polaris range of cards in the market, surely in terms of both price and performance. AMD is promising gaming frame rates that will comfortably top the RX 480 (and presumably by extension the RX 580), and absolutely trounce the Nvidia GTX 1650.

Even after a pre-announcement briefing with AMD itself we’re still not exactly awash with details about the new Navi range of cards. We don’t for example know what the release date is for the new GPUs, or indeed what cards will actually carry the RX 5500-series moniker.

We do know that Gigabyte has already registered RX 5500 XT as well as RX 5500 cards for retail, so there are likely to be at least two flavours of GPU on offer, presumably at launch. AMD has told us the RX 5500-series will be a partner launch – so there’ll be no reference cards – and that there will be a host of different specs right from day one. Though some GPU partners have also said they know very little…

While we don’t have final details about the cards, we do now know a fair amount about the actual silicon that’s going to be going into them. The 158mm2 7nm GPU in question, the Navi 14 chip, has a total of 24 compute units and 1,536 RDNA cores inside them. That said AMD has only officially announced the RX 5500-series using 22 CUs despite official imagery of the GPU obviously showing 12 of its new work group processors.

These are essentially dual compute unit parts, and for a 22 CU graphics card it would have to come sporting a weirdly asymmetrical 11 work group processors. We can though extrapolate that AMD will be releasing an RX 5500 XT with 24 CUs and 1,536 RDNA cores to accompany the announced RX 5500 with 22 CUs and 1,408 RDNA cores. 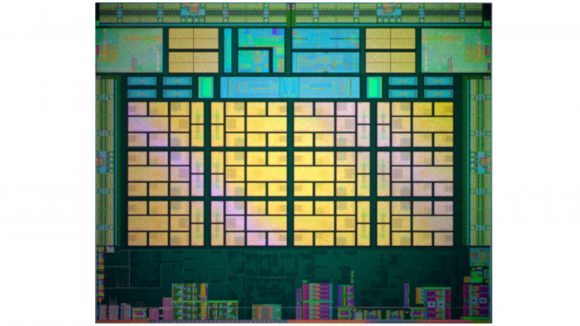 But whatever the core and clock speed differences between the two potential Navi 14 cards, they will both be utilising 16Gb density 14Gbps GDDR6 memory chips, and potentially in different capacities too. There will definitely be 8GB cards on the shelves come launch, but AMD’s Simon Ng, also said that we should “expect to see 4GB versions from OEM partners.” 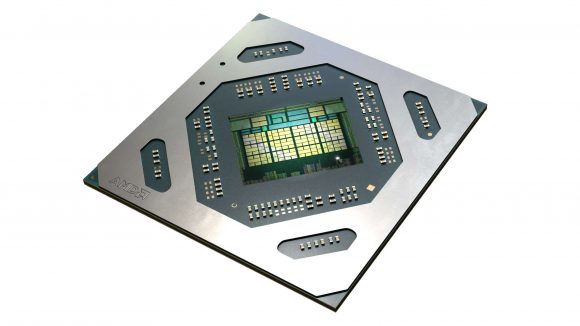 The RX 5500-series will also use an aggregate 128-bit memory bus, but as that’s still running GDDR6 memory, you’ll have plenty of bandwidth running across the 8-lane PCIe 4.0 connection.

In terms of performance, AMD is promising a substantial uplift in AAA titles compared with the RX 480. The use of the RX 480 is a strange one, considering it’s not that much different to an RX 580. Against the green team, the RX 5500 is also expected to deliver up to 37% higher gaming performance than the GTX 1650 when running at 1080p. 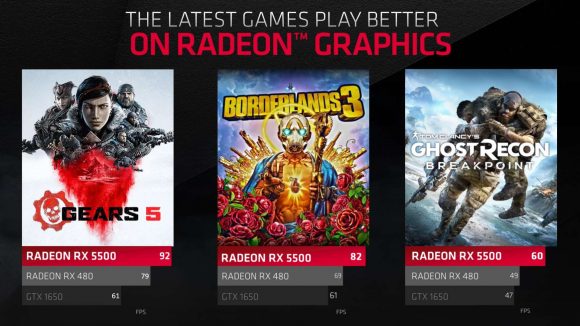 The comparisons are especially interesting when you start to consider the relative pricing of the different GPUs in question. The GTX 1650 is a $150 card, while the RX 480 was a $250 GPU at launch. That could place the pricing for the RX 5500 anywhere between those two cards, and we would be willing to bet Nvidia will be waiting on the final retail cost of the new Navi GPU before it lets loose the GTX 1650 Super and GTX 1660 Super revisions. 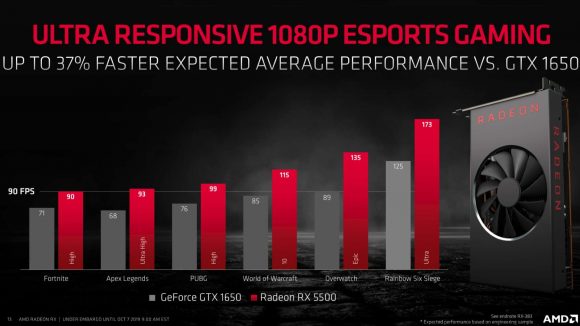 Especially after all the potential ‘jebaiting’ that went on around the RX 5700-series launch and the subsequent online back-slapping that went on afterwards. That must’ve really stuck in Jen-Hsun’s craw.

Expect to see a whole lot of tit-for-tat announcements, release date spoiling, and potentially some pricing switcheroos from either side as we get closer to launch. And we’ll of course keep you up to date on the lot.