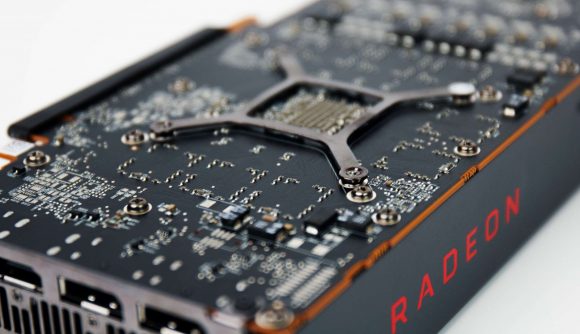 AMD’s next Radeon cards, the RX 5600 and potentially RX 5600 XT, look like they’re gearing up for an imminent launch as the Navi 14-based GPUs have been spotted in some recent CompuBench performance numbers. So far we’ve only had the RX 5700 XT and its weaker sibling popping up sporting the Navi 10 graphics silicon, but it doesn’t take Nostradamus to tell that AMD isn’t just going to stop there.

I mean we’ve also had everyone from Sapphire to Gigabyte to Asus registering graphics cards with RX 5000-series names. Sapphire has registered 19 of them, with the RX 5500 at the bottom and RX 5950 XT up at the top.

Given that AMD itself has said this is now the graphics card naming scheme it’s going to be using for the next five to ten years, Sapphire could have simply extrapolated that the lowest possible Navi card would come rocking the RX 5500 name and the highest-spec version might eventually ship with the RX 5950 XT title. But you’d hope AMD might give its biggest GPU partner a little more of a heads-up than that.

However the actual naming of the new Navi 14 graphics cards goes, the GPUs themselves have started being tested. And reliable Twitter bod, Komachi, dug out that CompuBench entry which has given us a bit of an insight into the new, lower-spec Radeon RX 5000 graphics cards.

Read more: These are the best GPUs for gamers

The main point of contention is the reporting of the compute units CompuBench uses. The entry lists a maximum number of CUs as being set at just 12 for the Navi 14 GPU, which would put the RDNA core count at just 768. Komachi has noted that, likely because the Navi RDNA architecture uses dual compute units as ‘workgroup processors’ and the software is getting confused, the actual number of CUs is probably going to be double that at 24.

But therein lies a problem: there are still a whole lot of Polaris-based GPUs out there on the eshelves… and they don’t cost a lot. In fact you can grab a quality 8GB RX 580 for just $180 or £160 right now, so if the RX 5600-series is going to perform at the same sort of level they’re going to have to be mighty cheap at launch.

Especially when the CompuBench entry lists the Navi 14 card there as only having 4GB of video memory attached to it.

It’s going to be fascinating to see how AMD navigates the existing inventory and whether that necessitates the RX 5600-series and the rest of the Navi range getting held back just a little bit longer. But we’ve still got the third party RX 5700-series launching in August first.