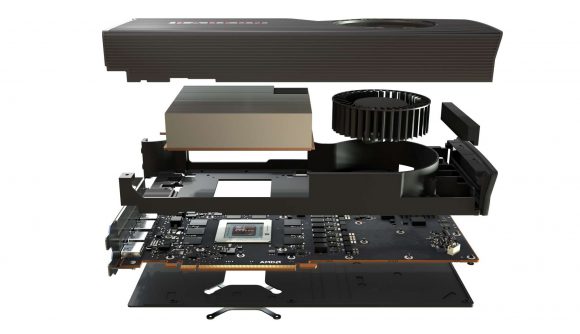 Looks like there’s a potential silicon lottery on the cards when it comes to the new AMD RX 5700 XT and Radeon RX 5700 graphics cards. The new Navi RDNA-based GPUs come sporting the modern GDDR6 graphics memory, but from a scan of the vBIOS leaked online it seems AMD is sourcing its VRAM from both Samsung and Micron.

There is a history of Micron-supplied memory not necessarily always being the strongest option on the table when it comes to doling out the highest performance from a given graphics card. Honestly, that’s probably not going to be a problem for most of us – the idea of overclocking our expensive new graphics card can be a rather terrifying one – but if you want the top potential performance then the internet hivemind would have it that Samsung is the memory to go for.

Though there has also been a certain level of scrutiny on Micron memory given some failures of GTX 1070 cards were linked to its use instead of Samsung GDDR5 and there were some, largely debunked, concerns the early failures of RTX cards were down to the Micron memory too.

Whatever your feelings about all of that the serial Twitter hound, Komachi, has highlighted an entry in a leaked RX 5700 XT vBIOS from TechPowerUp (now taken down) that indicates two distinct codes for GDDR6 memory from either Samsung or Micron.

It’s listed under the memory support section where is has either an autodetect option for the VRAM or a pair of entries for the different manufacturers’ memory options:

We don’t yet know how the two manufacturers are being used in supplying the cards; Micron could be the main supplier for the AMD reference cards while Samsung might be the ones you’ll see in the third party options coming later on, for example. Or there may not be any key distinction in terms of which gets used where at all.

It’s likely that the only difference you might see between the two different memory manufacturers is that one might overclock a little higher than the other. We can’t speak to how much difference overclocking might make to your Navi-based RX 5700 or RX 5700 XT graphics card, but once the embargo lifts on July 7 we’ll be able to have more of a deeper chat about things.