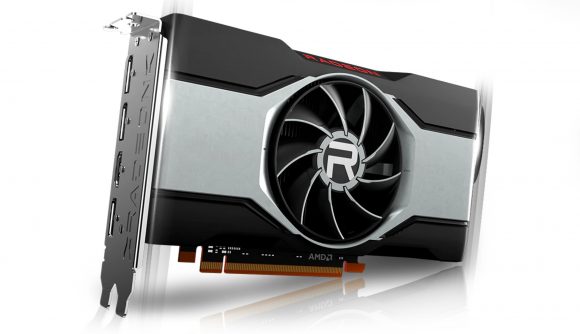 After many leaks and rumours, AMD’s RX 6600 XT graphics card has finally been unveiled at this year’s Chinajoy conference. Arriving on August 11, it looks like it could be one of the best graphics cards for high-framerate gaming at 1080p, if the performance boasted in AMD’s presentation is anything to go by.

AMD is targeting this card at 1080p gaming with an MSRP of $379, but you’ll likely be paying slightly more than that with current GPU stock issues. Nvidia’s 1080p-designated RTX 3060 may have a lower MSRP of $329, but you’ll be hard-pressed to find one near that price right now.

The design shown by AMD with its single-fan cooler looks pretty smart, but unfortunately it won’t be available for purchase. It’s not releasing a reference model this time round, so all cards will be sold with different designs through AIB partners such as Asus, MSI, and Gigabyte.

The specs for the new card are similar to what we heard in earlier rumours: 2,048 stream processors running at 2,359MHz, along with 8GB of GDDR6 VRAM. AMD says this delivers an average of 125fps “across a wide range of modern AAA titles”, with graphical settings turned to the max at 1080p. This includes 176fps in Resident Evil Village, 92fps in Assassin’s Creed Valhalla, and 164fps in Battlefield 5. 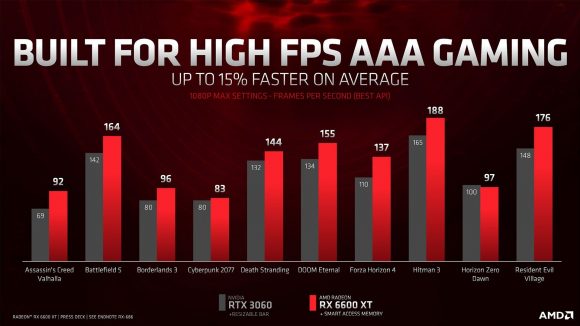 These tests didn’t use the fps-boosting AMD FSR technology, which could help push those figures further. However, it’s also worth noting that these games might represent the best of AMD’s benchmarks, so we’ll get a stronger idea of how it performs across the board once it’s in the hands of reviewers and users next month.