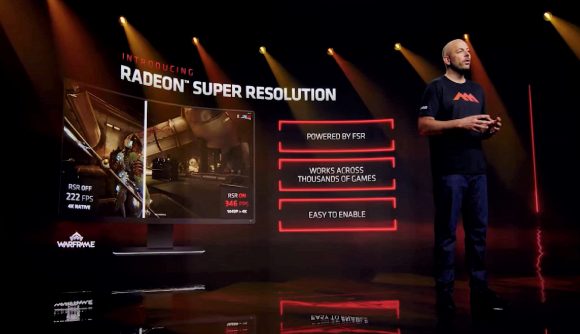 Upscaling tools are a lifesaver when attempting to boost fps, helping strike a balance between performance and visuals. While Nvidia DLSS often overshadows FidelityFX, it’s not inherently compatible with your entire gaming PC library, meaning you could struggle to run the latest games at either 4K, or on ageing rigs. Thankfully, AMD just announced Radeon Super Resolution, a new upscaler that should work with just about any game.

While RSR probably won’t replace FSR outright, the Radeon feature will help AMD take on both Nvidia DLSS and Intel’s XeSS, a scaler that’s set to be included with the company’s upcoming Arc Alchemist graphics cards.

AMD’s RSR could help its GPUs remain amongst the best graphics cards, but we’ll need to wait to see how the upscaling solution actually fairs in comparison to its competitors and FSR. Naturally, you’d expect universal game compatibility to come with some sort of compromise, but if the red team’s claims hold true, Radeon equipped PCs could end up running more games with higher settings enabled.