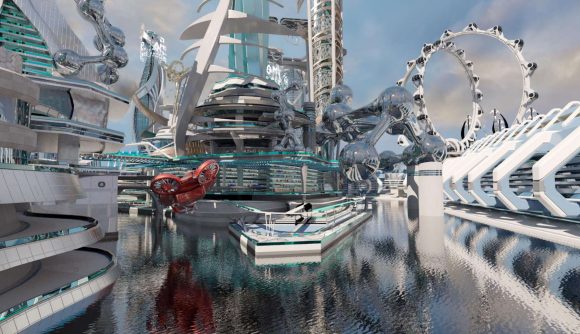 AMD has divulged fresh details about its all-new hardware accelerated approach to real-time ray tracing in games, fessing up to having “co-architected and co-developed” the latest DirectX Raytracing 1.1 API alongside Microsoft. Specifically to “take full advantage of the common ray tracing architecture” between a Radeon-powered PC and the next-generation Xbox Series X console.

AMD’s Financial Analyst Day has given us a lot to think about, from a new compute-focused, post-GCN, CDNA graphics architecture, to another two generations of Navi and RDNA-based graphics cards up to 2022. Part of that is going to be the promised Big Navi 4K-endangering release, but sadly not until the end of the year.

But, aside from the late-2020 high-end Navi 2X GPU release date, the smattering of information about the ray tracing architecture being shared between PC and consoles this year is arguably of the most interest to gamers. AMD claims that commonality is what’s going to drive ray tracing adoption as well as lessen the performance impact that comes from merely turning the advanced lighting tech on in the first place.

“Adoption has been slow,” says AMD’s David Wang, “mostly because of a lack of content, lack of hardware, and the performance penalty when gamers turn it on. So we have developed an all-new hardware accelerated ray tracing architecture as part of RDNA 2. It is a common architecture used in the next-generation games consoles.” 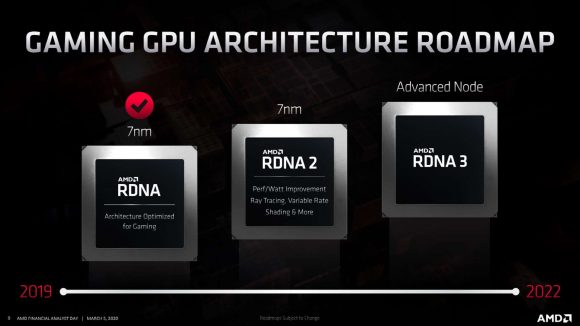 There is still a little confusion as to whether Wang is referencing both Microsoft as well as Sony’s next-gen games consoles there, because the suggestion has been that the PS5 is going to be built on a custom chip with the Navi 1X architecture and therefore RDNA 1.

But Sony has confirmed there will be hardware accelerated ray tracing in the PS5, which would seem to suggest RDNA 2 support. See what I mean? Confusing. Either way, having the same essential hardware designs being used across PC and consoles means that developing games across both platforms should simplify the porting process for ray tracing.

It’s going to be fascinating to see how similar that ‘all-new hardware accelerated ray tracing architecture’ is to the methods that Nvidia has so far employed within its Turing graphics cards. The green team got on Microsoft’s DirectX Raytracing API at the ground floor, and optimised its own ray tracing architecture around it, so I’m interested to see just how different AMD’s all-new architecture will be. 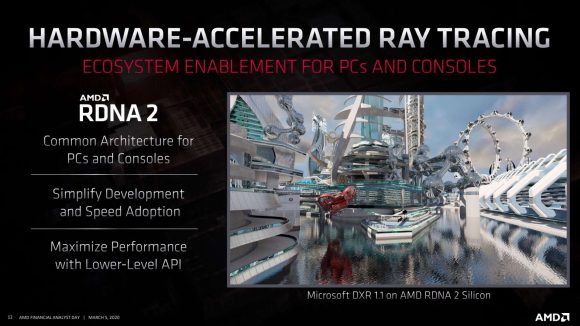 Microsoft and AMD, however, worked together on the latest iteration of the DXR API specifically to aid the Xbox and RDNA graphics cards. But DXR 1.1 is still entirely backwards compatible with Nvidia’s GPUs, which would suggest there will be some commonality across all platforms.

“Microsoft DXR 1.1 API… was co-architected and co-developed by AMD and MIcrosoft to take full advantage of the common ray tracing architecture,” says Wang.” This is a great proof point of the benefit of ‘Radeon everywhere’.”

Or at least it will be if there is a tangible performance boost for Radeon’s ray tracing versus GeForce RTX ray tracing for similarly priced graphics cards. If developers are coding specifically for AMD’s ray tracing methodology for consoles, and it is significantly different to Nvidia’s, then you would naturally expect performance to be better for the red team. But only time will tell how that all plays out.

The fact that console developers can get closer to the metal on a closed-box than they can on PC will mean that some of the performance issues associated with turning on ray tracing with Nvidia GPUs can be mitigated by a low-level API.

“We also provide lower-level API support that gives more controls to the developers,” says Wang, “so they can extract more performance from the underlying hardware platforms. This will help mitigate the performance concerns.”

Certainly Nvidia isn’t going to be sitting on its laurels and by the time the Navi 2X graphics card family is launched, starting at the end of this year, there’s a good chance it will be going up against a whole new family of GeForce cards.