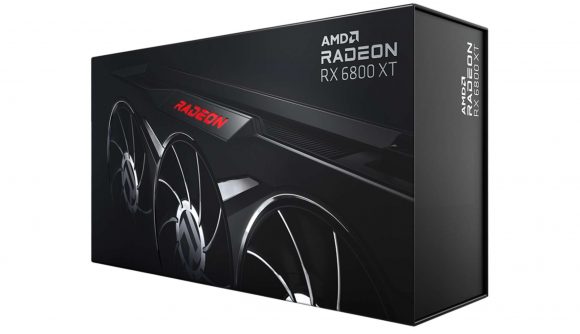 AMD released a new all-black version of its Radeon RX 6800 XT today, and in typical PC hardware fashion it sold out almost instantly. Members of the Team Red community received a message from AMD in advance of the April 7 launch, mentioning a ‘limited availability’ offer on a Midnight Black RX 6800 XT – and it was indeed a limited edition, with the AMD website flickering on and offline as gamers scrambled to get their hands on one.

It seems AMD released the card at the same $649 MSRP as the original model in the US, however, the UK‘s £562.79 price tag is curiously less than the original £649 retail cost. That’s a steal when compared to the over-inflated prices of hard to find GPUs, but you can’t get much more difficult to find than something that’s entirely out of stock

The specs on the new listing are identical to the original card, so it looks as though this is a simple redesign of the reference cooler, as opposed to any factory overclocking or extra VRAM at play.

If the Radeon RX 6800 XT Midnight Black edition looks familiar, that’s because leaker Harukaze5719 posted a photo of one as early as November, 2020.

Still, if you missed out on AMD’s new card, you could always try your luck at nabbing another GPU if the launch of the Nvidia RTX 3070 Ti or RTX 3080 Ti go ahead next month, as rumours suggest.