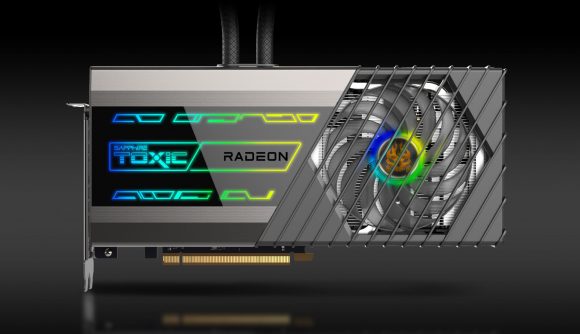 It’s rare to see a graphics card with out-of-the-box water cooling – the last one we saw was EVGA’s RTX 3090 Kingpin, released back in December. Now, Sapphire has released a limited edition AIO-cooled version of AMD’s best graphics card, the Toxic Radeon RX 6900 XT.

While strapping the best AIO cooler to your CPU is a common step when building the best gaming PC, water cooled graphics cards are more of a rarity, either done through custom water loops with conversion kits like NZXT’s Kraken G12 or ready-to-go DIY models like the newly announced PowerColor Radeon RX 6900 XT Liquid Devil, or with plug-and-play solutions such as Sapphire’s new card.

Sapphire’s Toxic AMD Radeon RX 6900 XT comes with the pump pre-installed, alongside three fans attached to a 360mm radiator. There’s even a single built-in fan on the card itself for added air colling, and, of course, RGB lighting. When it comes to overclocking your GPU, this card looks like it’ll be a champion thanks to its ‘one click Toxic boost’ streamlining the process.

Under the hood, it features 5,120 stream processors, 80 ray accelerators, a base clock of 2135MHz, and a boost clock of 2365MHz. As for connections, you can hook it up to the best gaming monitor through a single HDMI 2.1 or one of the three DisplayPort 1.4 inputs.

Unfortunately, the first wave of Sapphire’s Toxic AMD Radeon RX 6900 XT is already out of stock on most retailers’ websites, with the option to be notified when it becomes available once again. Since this is a limited edition run and there are plenty of stock issues plaguing the industry right now, it might prove tough to get your hands on one even with email notifications.