The AMD Ryzen 5 processors have landed and have brought with them the most significant gaming CPU AMD have ever created. The six-core, 12-thread Ryzen 5 1600X has supplanted the Intel’s K-series Core i5 chips as the go-to gaming processors for the mainstream market.

Your gaming PC is all about the CPU/GPU combo, so make sure you pair your processor with the best graphics card around.

That’s big. We’ve historically been pushing those resolutely quad-core i5 CPUs because of their impressive gaming performance, but with three times the thread-count the hexcore Ryzen 5 has a lot more in the bank, from multi-threaded performance to future-proofing against next generation game engines. And all for essentially the same price.

Along with the six-core chip is a quad-core, eight-thread R5 1500X, but it is noticeably off the pace compared with Intel’s quads. But with a big brother like the 1600X they were always going to be playing second fiddle.

What could make things interesting though is non-X variant, which has essentially the same design as the 1600X, but with a lower price point and TDP. With a little light overclocking the Ryzen 5 1600 could still be the real winner if you’re willing to risk the longevity of your new silicon. 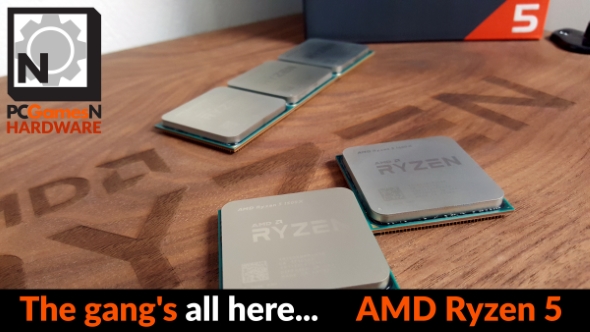 We’ve also gone over AMD’s Ryzen 7 range with a fine-toothed comb, so why not check them out while you’re here?

Original story March 16, 2017: Following hot on the heels of the octa-core Ryzen 7 CPUs come the more mainstream Ryzen 5 chips, on shelf April 11. These sub-$300 chips are the ones most likely to find their way into our gaming rigs, offering more cores than the competition for the same cash.

The number of peops opting for CPUs in this price bracket is, according to AMD, twice the size of that chasing the enthusiast-level processors like the $500 eight-core / 16-thread Ryzen 7 chips. And that makes the mid-range of AMD’s processors arguably the most important for them as a company and potentially the most exciting for us as gamers.

On April 11 AMD will be releasing four different Ryzen 5 processors, in a mixture of six and four-core configurations. The highest-spec option will be the $250 R5 1600X, a six-core / 12-thread chip with the same stock and boost clocks as the top-end R7 1800X. In terms of sticking it to the competition the R5 1600X is going to go head-to-head with Intel’s equivalently-priced Core i5 7600K.

Though the Intel chip will be slightly quicker out of the blocks, and also have a slight lead in most gaming benchmarks, the Ryzen 5 chip will be sporting more than double the thread count of the Core i5’s four core setup.

The 7600K is still a monster overclocker, and we don’t expect the Ryzen 5 chips to be able to match it, but we’re talking about a resolutely quad-core / quad-thread CPU versus a much broader six-core / 12-thread chip for the same price.

But if you’re happy sticking with four cores then there are much cheaper quad-core chips available in the Ryzen 5 range, and they will still have unlocked multipliers as well as multi-threading enabled to deliver eight threads of CPU performance.

The $169 R5 1400 is actually cheaper than the $190 Core i3 7350K and comes with twice the thread count. You are, however, looking at clockspeeds around 1GHz slower than the Core i3, which might affect its in-game performance.

In terms of the motherboards AMD are looking more towards the B350 AM4 chipset for the Ryzen 5 chips, as opposed to the enthusiast-level X370 motherboards they pegged for the top-end Ryzen 7 processors.

The B350 boards may be the cheaper cousins, but they still retain overclocking support and are only really missing compatibility with multi-GPU setups.

Once more AMD are aiming to provide a seriously disruptive price/performance ratio into the CPU market. And in this high-volume segment that could be a much bigger thorn in the side of Intel than Ryzen vanguard.