It’s celebration time at AMD, and not just because it’s set to launch both the next-gen Ryzen 3000 processors and Navi graphics cards in just a few short months. AMD is turning 50 this year, and to celebrate the chip manufacturer is reportedly preparing a 50th Anniversary Edition of the Ryzen 7 2700X.

The prospective new chip has been listed on ShopBLT with a new part number and did initially appear with a new, higher, price tag too. That would possibly indicate a change in the specifications for the Anniversary Edition, but the listing on the retail site has been altered since it was first launched, with a note now stating the listing “will be removed from our site shortly.”

For the time being, however, it is still in place even if the price is gone and there is now no facility to pre-order. The very existence of the listing ahead of the May 1 anniversary of AMD’s founding makes it very likely this is actually ‘a thing’ and not just a random upload by a playful intern.

The listing can currently be seen at ShopBLT (via Chiphell) and is specifically titled as ‘Ryzen 7 2700X 50th Anniversary Edition’. The original price that was placed on the product page was $341, while the initial 2018 version had a release price of $329. While that might well indicate a change in specification it is worth noting that a standard Ryzen 7 2700X on the same site will set you back $383, though that is almost $100 more than the 2700X retails for on Amazon right now.

Read more: These are the best CPUs for gaming right now…

But what would be the point in releasing a new edition of the chip without giving users something fresh? And if you’re shipping a 50th Anniversary CPU in this day and age without giving it a turbo clock of at least 5.0GHz then your marketing department will be up in arms… 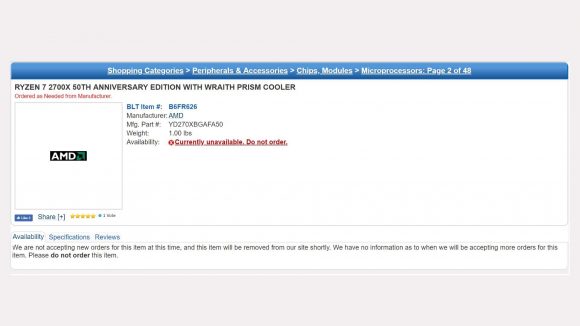 The current turbo clock speed of the 2700X, however, is a much more sedate 4.3GHz and that rarely rears its head during all-core testing. We also struggled to get anywhere further than 4.3GHz when we were overclocking our 2700X sample, so if AMD is able to manufacture and ship a version of the 12nm silicon which can even nominally hit 5GHz that would be a pretty impressive feat.

But we are almost exactly a year on from the first launch of the Ryzen 2000-series flagship chip, and the 12nm manufacturing process will have matured in the meantime. That could mean the CPUs GlobalFoundries is producing for AMD right now – before complete Zen 2 production makes TSMC its primary partner – are more able to make the grade. 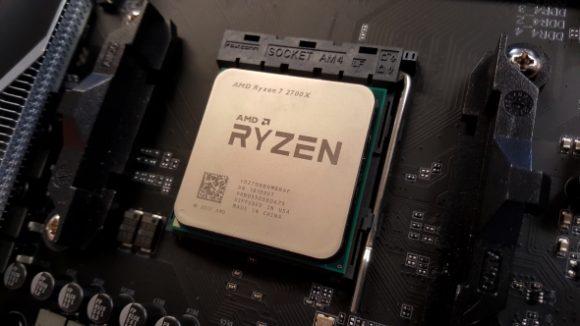 Chances are that if AMD has been able to bin-sort a bunch of 5GHz capable 50th Anniversary Edition 2700X chips that they will be in a rather limited number, so there may not be too many on show once AMD’s May 1st birthday rolls around.

But then how many people would be willing to fork out $341 on 12 month-old CPU silicon, however high it’s clocked, when there is the very imminent prospect of socket-compatible 7nm Ryzen 3000 processors launching in perhaps a couple of months? Not too many, I would wager. Spending $340 on a Ryzen 3000 in July should get you higher clocks, more performance, and potentially a fair few extra cores too.

Anyone sitting on a Ryzen 2700X 50th Anniversary Edition chip might not be feeling too cheery once the 3700X gets released.