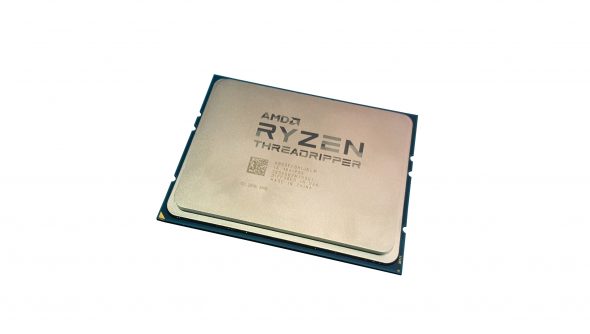 There’s plenty going on in the land of AMD lately, with Ryzen 5 3600 XT, Ryzen 7 3800XT, and Ryzen 9 3900XT parts being launched just recently. And now, it looks like a ‘Threadripper Pro’ CPU series might be coming to the market, too. You might be familiar with the ‘Pro’ naming scheme, as last year AMD announced Ryzen Pro CPUs, aimed at businesses.

A post on Chiphell forums was spotted by Twitter user 9550pro (‘HXL’), showing a supposed ‘AMD Ryzen Threadripper Pro 3995WX’ CPU. The Chiphell thread now has restricted access, but, luckily for us, HXL has posted the picture to Twitter. The new Threadripper CPU looks real enough, but we can’t say for sure whether it is until we get official confirmation from AMD – the company has told us it can’t comment on the issue.

AMD Threadripper CPUs are HEDT (high-end desktop) processors like Intel’s Cascade Lake processors, offering core counts fatter than post-thanksgiving Jabba the Hutt and clock speeds to match. In fact, the AMD Threadripper 3990X was shown playing Crysis without a GPU, rendering the game using only (“only”) its 64 cores and 128 threads. And there was me feeling all high and mighty with a lowly six cores and 12 threads.

But Threadrippers aren’t aimed at the gaming market, really. Sure, if you have a few thousand dollars spare and no respect for the concept of diminishing returns, a Threadripper is about as great a gaming CPU that you can buy, but these processors are aimed at professionals and creatives who do a lot of rendering and encoding, for example.

That’s the Threadripper name dealt with, but what about the ‘Pro’? Well, the AMD Ryzen Pro series was released last year and was aimed primarily at businesses. Its CPUs mirrored some of the best gaming CPUs like the Ryzen 5 3600, but lowered their TDPs and max boost clocks, and also added some additional security features intended to prevent in-person cyber attacks – the sort that are a threat for business PCs but not so much for home gaming systems.

According to VideoCardz, on top of the usual ‘Pro’ offerings, the AMD Threadripper Pro “is said to feature 8-channel memory and up to 2TB of capacity. For comparison, consumer Threadripper series are 4-channel only and they support up to 256GB.”

So, if we do see a Threadripper Pro series, and if it’s suitably similar to the Ryzen Pro series, these will likely be CPUs that have better memory capabilities, but lower TDPs and boost clocks, along with business-oriented features like dedicated security processors. Not the sort of processors you’d slap in a gaming rig – that probably won’t stop people from attempting to play Crysis without a graphics card on one, though…