TSMC ramped up its 7nm process node in one month, says head of global marketing Godfrey Cheng. From zero wafers to full 7nm capacity took the pure-play foundry, who supplies both AMD and Nvidia with chips, just over a month, seeing the node swiftly claim the top title as one of the company’s most successful.

“Not only was N7 the most advanced technology we’ve delivered ever for TSMC,“ Cheng says during AMD’s ‘Meet the Experts’ webinar, “it was also the fastest ramping technology that we’ve ever produced…. We were able to go from zero wafers to full production in just over a month. That’s something of a phenomenal thing to do.”

In a close second N7’s rapid ramp-up is the 16nm process node – coming in at roughly around four months from zero to hero. This process was the basis for all Nvidia Pascal graphics cards, although Nvidia has since shifted to TSMC’s 12nm process node – a variant on 16nm. In stark contrast, the last major node before that, 28nm, took over 22 months to climb gradually up to full steam. 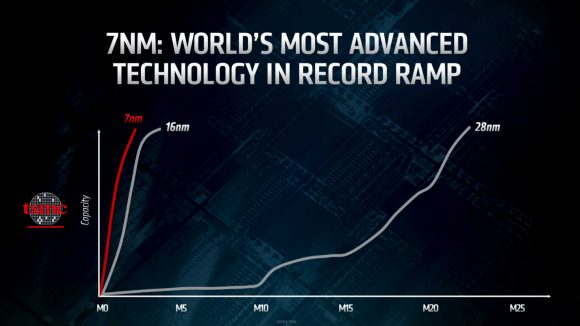 TSMC previously touted its rapid readiness when it promised “not to commit the cardinal sin of actually leaving demand on the table.”

AMD struggled to maintain stock for some of its high-end, high core-count CPUs, such as the Ryzen 9 3900X, at launch, but cited overwhelming demand as the root cause – and not TSMC’s capacity.

TSMC has swiftly made its advanced 7nm process node one of its most successful, and is expected a large number of companies, beyond AMD, to shift to N7+, too. Yet the company is already eyeing up 5nm, and even 3nm production for the not-so-distant future – 5nm will hit volume this year, and 3nm in 2022. But don’t be fooled, those nanometres don’t mean anything when it comes to actual gate width – marketing, eh?