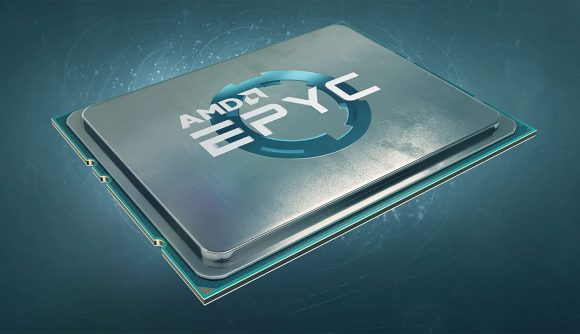 We’re all patiently awaiting AMD Zen 3 CPUs. Previously, there were rumours abounding that the upcoming AMD CPU generation was expecting some serious delays, but hope was reignited when AMD told GamersNexus that “the delay on ‘Zen 3’ is inaccurate”. As if to further stoke these fires of hope, a Zen 3 CPU listing has now been spotted – this one of the EPYC Milan variety.

The listing was spotted by Twitter user ExecutableFix (via Komachi Ensaka) and describes a CPU with model name “AMD eng sample: 100-000000114-07_22/15)_N”. It also describes the base and boost frequencies of the EPYC Milan processor, at 1.5GHz and 2.2GHz respectively – there’s no mention of its core configuration, however. Of course, this is only an engineering sample so clock speeds are likely to change.

AMD’s EPYC platform hosts some of the best server processors around, and the company has seen its server market share increase greatly over the past year. Its second AMD EPYC ‘Rome’ generation of server CPUs is being put to such uses as helping to form the US Department of Defense’s (DoD’s) Cray Shasta supercomputer and even helping to uncover the hidden structure of the universe on the LHCb experiment at CERN.

With the current AMD server CPU generation being put to such terabyte-on-terabyte-per-second uses, we can only guess what uses its upcoming Milan generation will be put to, and how many terabytes of data it will churn through. Lots, in our estimation. But while server computing is great as a spectacle, the humble gamer will be more interested in AMD’s upcoming consumer CPUs.

1.5GHz base, 2.2GHz boost. This sample seems to match the 64-core Rome ES' in terms of clockspeed

I don't know how many cores this ES has, but it's finally some Milan info 😁 pic.twitter.com/bQX9oVztyn

Well, the good news is that this listing reinforces the belief that AMD is apparently sticking to its schedule. Because AMD’s EPYC Milan processors are made using the same Zen 3 architecture as its upcoming Ryzen CPUs, and now that we’re seeing evidence of Milan in the wild, there’s every reason to believe AMD Ryzen 4000-series desktop CPUs will be released later this year, as was originally expected.

These CPUs, like EPYC Milan processors, will be made using TSMC’s N7P or N7+ process node (and using DUV or a combination of DUV and EUV, respectively), and the existence already of an engineering sample made using this fabrication process bodes well for a 2020 release of next generation of Ryzen desktop CPUs – it shows TSMC’s fabs are being put to good use, and that the process node should be well prepared for Ryzen ‘Vermeer’.