Gimme an “A!” Gimme a “-dvanced Micro Devices!” It’s been quite a week for computing giant and perpetual NVIDIA adversary AMD. After releasing their Q1 2016 quarterly report the company’s share value skyrocketed by over 50% over the course of a single day’s trading.

Hmm, what else makes sharp changes in direction at incredible speeds? You, while playing the best racing games on PC. Check ’em out.

And before you bust out the red braces, novelty-sized calculator and decorative ticker tape, there’s a very clear explanation for that sharp upturn. AMD’s Q1 2016 report involved some seriously juicy announcements, and presented an upcoming year of prosperity with suitable conviction that the market responded positively. Very positively: 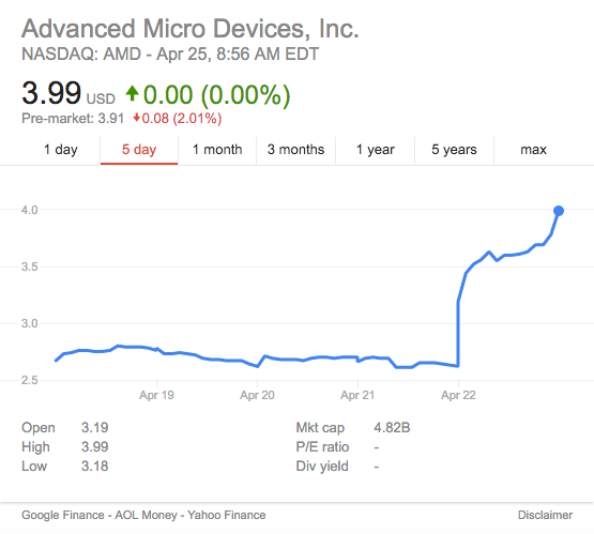 It’s the highest value AMD stock has retained in over a year at $3.99 per share, and that 52% increase between Thurs and Fri represents the highest surge in the company’s history.

The first announcement to cause a stir was that AMD have three new semi custom SoC (system on a chip) designs that will likely power new console incarnations/generations. Sony and Nintendo involvement is speculated at this very early and hazy stage, and AMD themselves say one SoC will be ‘ramping’ in 2016 while the other two will roll out in 2017.

AMD SoCs currently power both PlayStation 4 and Xbox One systems, which as one might imagine is a fairly important aspect of the business. Quite what the new models mean for new generation of consoles, or refreshed designs of current-gen boxes, is anyone’s guess, frankly. What’s important is that the industry thinks AMD will make a lot of money from them.

Closer to home, they’ll also be releasing their new generation graphics cards next quarter. Aka this summer. Aka really soon. With mounting rumour pieces and ‘leaked’ photos of GPUs, it appears NVIDIA aren’t far away from rolling our their new graphics cards either, but they haven’t pinpointed a date yet. With both manufacturers using FinFET manufacturing processes there’ll be some degree of ‘bedding in’ to get past on the assembly lines, but whoever’s able to strike first gives themself an early advantage.

AMD now also have a licensing deal with $293 million with Chinese companies, and have adjusted their projected profits to reflect that they now expect to turn a profit in the discrete graphics card market in Q2 2016 – no doubt as a result of having a whole new generation of cards to sell.

So it’s good news for AMD then, and also good news for PC gaming. Whatever the colour of the graphics card in your PC; whatever alliance you’ve developed over the years, what we’re all after is good quality hardware sold at a competitive price, and the more big players exist in that market, the more incentive there is on each one to create that product and price it as such.