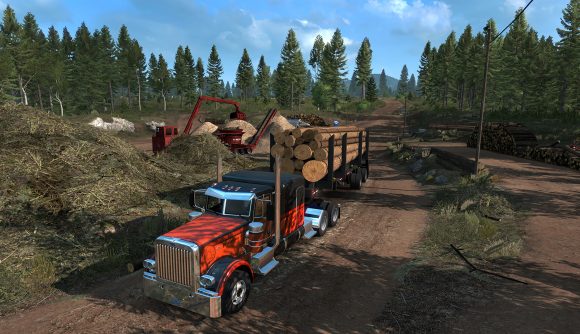 American Truck Simulator continues its long haul across the United States, and after nearly a year since the last bit of DLC, we finally know when to expect the trip to get to Oregon. After the first two add-ons explored the southwest, we’ll finally get to head up the west coast to visit the likes of Portland, Salem, and Eugene this October.

The DLC will bring us 5,000 miles of new roads, taking drivers to 14 major cities, 13 big truck stops and lots of smaller ones, and landmarks from Mt. Hood to Crater Lake. There are 17 local docks and industries and – my favourite – “25 unique, complex and realistic custom-built junctions and interstate interchanges.”

Listen, when your goal is to accurately recreate a mundane activity in a real part of the world, you’ve got to get granular. After the New Mexico and Arizona add-ons brought us a whole lot of continuous desert over the past two years, it’ll be nice to head to the more temperate climes and green forests of the northwest.

Oregon’s industry is driven largely by forestry, so expect a lot of logging hauls. This update marks the start of a change toward more detailed economic simulations, though SCS says that change will be a long-term one. “The goal is definitely for our deliveries to make more sense in players’ eyes – we will be gradually moving away from the concept of random cargoes headed from a generic point A to a generic point B.”

There’s no official price for Oregon just yet, but New Mexico was $11.99 / £8.99 / €11.99 – so expect something similar here. That pack launched last November, and the Oregon DLC was announced early this year, so it’s been a long time coming.