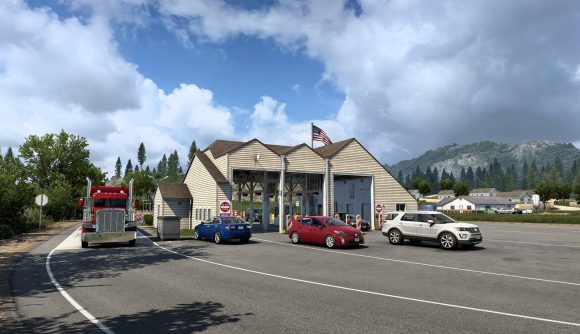 American Truck Simulator developer SCS Software has already revamped California once before, and while it’s not getting bigger in this second update, it is getting better. The studio has announced a “reskin” of California that will be slowly rolled out over the course of several upcoming patches, and it’ll be free for all players.

The updated California will feature redesigned cities to match SCS’s “current quality standards”, a “major rework” to the current road layout. There will also be new assets to represent more California-specific details like architecture, signs, road designs, tourist attractions, and the like. The devs say that “thanks to the growth of our map teams here at SCS Software, we now have the capacity to take on this huge task at hand, while also working on future map projects.”

These updates will also introduce agriculture border control stations – a real-world system in California where inspectors check trucks hauling commodities for invasive pests before allowing drivers into the state. In effect, these will essentially work as a new type of weigh station you’ll occasionally run into when attempting to cross the state line into California.

There’s no word yet on when you can expect the pieces of this reskin to roll out, but you can see a whole lot of very pretty screenshots on the official site.

The original revamp to ATS’s original state made California (and Arizona and Nevada) 1.75 times bigger, drastically increasing the drivable real estate in this digital America. Even as SCS continues rolling east, it’s good to see this truck game continue to make regular stops at its old haunts.