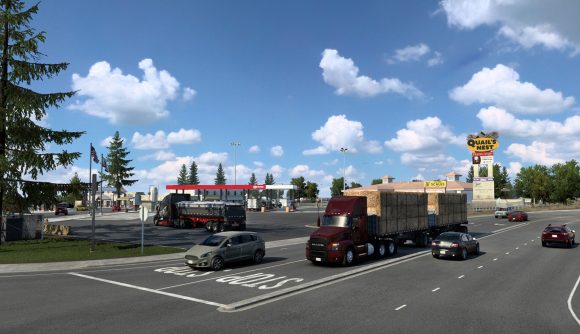 American Truck Simulator is getting a new California, and as the developers have previously explained, that means an end to San Rafael. There’ll be a new city in its place once the next piece of the California rework goes live, which is ultimately going to lead to a more realistic, better-playing road network in the area. Today, the devs have provided a look at that new road layout.

“A major focus of this part of the rework is going back to areas where roads may have not been geographically correct or represent the current standards that we are now able to achieve,” the devs say in today’s blog. “With more tools to create more complex and realistic road networks based on real-life references, we can bring more true-to-life assets to the road. This includes new junctions, crossroads, bridges, agriculture stations, rest areas, and more. Between major economy cities, drivers will now also come across settlements, which will become a common sight for players.”

In more specific terms, all the junctions have been rebuilt, the US-37 to Napa Valley crossroad has been rebuilt, there’s a new area around Carquinez Bridge, the I-80 and I-580 merge is more realistic, and the Richmond Bridge landmark has gotten a rework.

All these changes are due for the upcoming rework phase, but the new city replacing San Rafael won’t be coming until the next phase after that.

Texas and Montana are still incoming for ATS too, so there’s plenty more for the truck game coming up.