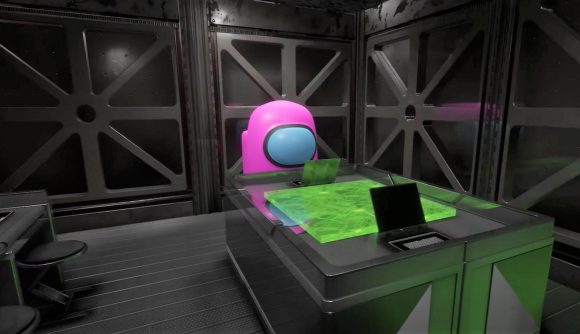 If you’re a fan of social deduction games, multiplayer games, and getting to run around a spaceship as a little bean while accusing your pals of being murdery impostors, you’ll probably have heard of Among Us by now. Innersloth’s title has become more than a little popular of late, hitting 1.5 million concurrent players on Steam alone last month. Since then it’s seen Final Fantasy 14, Rainbow Six Siege, and Brooklyn Nine-Nine mash-ups – and, now, it’s been recreated in 3D with RTX.

YouTuber Backitdev has posted a clip – included below – in which he demonstrates how he “made Among Us with RTX support in Unreal Engine 4”. While the developer says he’s only finished the creation’s level design so far, “later maybe [he]’ll make a playable game as well”. Starting with building the bare bones of Among Us’ spaceship interiors – the walls, windows, and doorways – Backitdev says he aimed to recreate the 3D map to the same proportions as Among Us’ version.

The dev also explains he made some furniture – a round table and seats – in Blender to help make its appearance close to Among Us’ original version, followed by a bunch of other items and features recognisable from the game, like that “hologram map” in the admin room.

Best of all, at around the 2:56 mark in the clip, you can see the game’s now incredibly distinctive beany characters recreated in glorious, shiny 3D – and while they’ve got a whole extra dimension, they’re recreated really faithfully. Take a look for yourself below:

As you can see in the clip, it looks like it took a lot of work bringing Among Us to Unreal Engine 4, but the result is hugely impressive – especially when that RTX gets switched on. Whether Backitdev takes it a step further to make it playable, we’ll just have to wait and see.

In the meantime, check out our Among Us imposter guide, Among Us best settings guide, and general Among Us guide for some tips on how to save or scupper your crewmates’ spaceship saving.