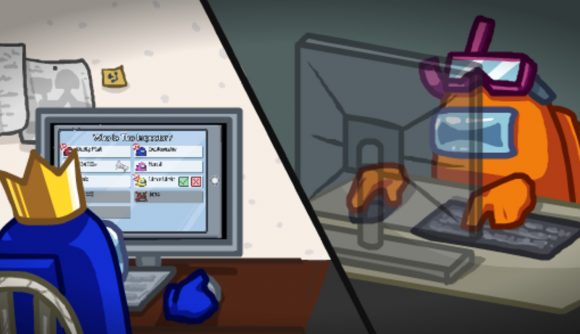 Among Us has been plagued by hacks of late, bots that spam the chat with right-wing propaganda, and despawning that breaks the game. Developer InnerSloth is working on solutions for the social deduction game, but the fixes are taking time.

The hacks began earlier this week, when players started seeing the in-game chat fill up with messages of “Trump 2020”, and links with the threat of hacking your device if you don’t click-through. The bots responsible have infected a huge amount of rounds of the multiplayer game, leading to a lot of pressure on the developers, a team of three, to try and sort out a hotfix. Solutions are happening, with two waves of fixes having been released thus far.

“Alright, wave two of anti-hacks are going out. Wave one did fix impersonation, this is why the prominent hack now is just chat spam and mass despawn,” one of the devs tweeted. “Wave two should fix both of these. We’ll see where we need to go from there.” The replies are a steady mix of those who’re now playing bot-free, and many that aren’t, so it’s clear the studio still has a climb ahead of it.

The hacking was instigated by Eric Loris, whose Youtube channel and Discord is among the links being spammed by the bots. In an interview with Kotaku, he stated he has little remorse for the trouble he’s caused. “I was curious to see what would happen, and personally I found it funny. The anger and hatred is the part that makes it funny,” he said. “If you care about a game and are willing to go and spam dislike some random dude on the internet because you cant play it for three minutes, it’s stupid.”

Alright, wave 2 of anti-hacks are going out:
Wave 1 did fix impersonation, this is why the prominent hack now is just chat spam and mass despawn (black room)
Wave 2 should fix both of these. We’ll see where we need to go from there.

This comes on the back of Among Us enjoying a massive boon in popularity, topping one-and-a-half million concurrent players in September. US House representative Alexandria Ocasio-Cortez played it in her debut livestream, as part of an initiative to encourage voting in the current US presidential election. If you haven’t jumped in yet, we have guides for the costumes and maps to get you started.