At first glance, Ancestors Legacy looks like it shares DNA with Total War but it actually follows in the too rarely-emulated footsteps of Company of Heroes… even if it swaps the Second World War for Vikings.

Being set against the backdrop of medieval Europe, the four factions in the game are Vikings, Anglo-Saxons, Slavs, and Germans. Each get their own single-player campaign alongside their multiplayer skirmishes to help you get to grips with their unique traits and preferred tactics. And you’ll need to, too, as there are many moving parts to manage as you command your units and get into vicious fights for terrain.

Check out the best strategy games on PC if you’re an armchair general.

In each battle you start with a base and one band of soldiers. Your army can be up to ten units strong but you can lower that number before starting a match if you wish. Villages need to be taken over to gather resources. Meanwhile, buildings at the base are placed in predetermined locations. Like Company of Heroes, and Relic’s other strategy classic, Dawn of War, the whole approach to the economy is very hands-off, which frees you up to focus on all the scraps, which are brutal and fast. 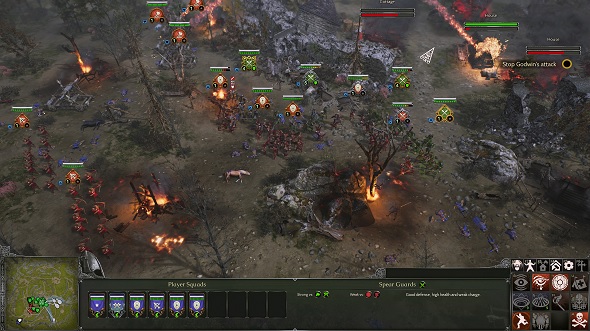 I can already say that Domination is my preferred mode. It rewards or takes away points based on how many villages you and your opponent control, giving each match the rush of a tennis rally. The action is fluid, villages keep changing hands, while your troops spring ambushes from wheat fields – you’re encouraged to be crafty and think on your feet at all times.

Annihilation, on the other hand, tends to drag on. You need to destroy the enemy base, and this requires you to have domination of the field to crush the enemy economy and the numbers of units needed to overwhelm their defenses. While you can build siege engines that make the process faster, they are slow and hard to control, so it’s best to have a mobile blob of dudes… and just play Domination, to be honest.

Unfortunately, you can have a really bad time if you go up against the wrong nation. The starting troops are rock-paper-scissors counters for each other. This is especially pronounced with Anglo-Saxon slingers: being the only starting ranged unit, they will get crushed in melee conflicts, and are feeble when it comes to taking villages. However, once you tech up, you’ll have an easier time – just don’t ignore armour upgrades, as while they slow your units down they do make them a lot tougher. 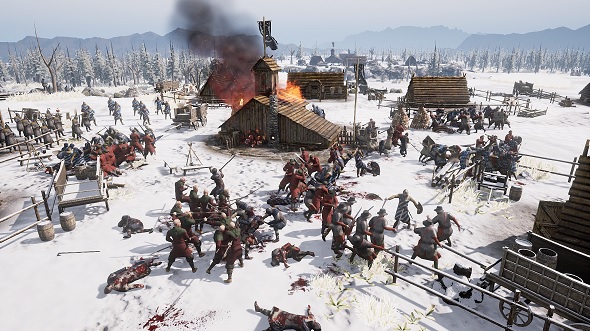 While combat in Ancestors Legacy is close to where it needs to be there are still some glaring issues. To be specific, ranged attackers aren’t marked on the map if they’re firing outside of your line of sight, and the same goes for ballistas, which is even worse as they can demolish several units with one shot. There’s also a problem with unit AI as it won’t deign to close in at melee range by itself so – you have to order everyone to move even an inch if you want to make any progress. This is especially annoying when an enemy party runs into your sentries and their nearby friends don’t rush to help them. Hopefully that’s not a bad omen for the future of AI as we try to get it to feel empathy for others…

Anyway, Ancestors Legacy’s multiplayer is going to be fast and bloody. While the units are more fragile than I would like, I guess it goes well with the theme of the game: the Viking age was no tea party, after all. Still, for anyone who has been hankering for another challenge as raw and thrilling as those offered by Company of Heroes, it seems there is finally a game that will at least attempt to deliver.