Popular economic management game Anno 1800 has enjoyed two season’s worth of expansions and updates since it launched in 2019, and now it looks like it’s set to receive a third in 2021. This comes not four months after a brand manager from Ubisoft took to Reddit to state that there were “no plans” for a new season.

“Right now our plan is to finish Land of Lions, fix any major issues in that DLC with the required game updates… After that, we would be ending development of Anno 1800, and moving fully onto our next project,” they said at the time.

They then further state that “things can change”, and clearly ‘things’ have as a new video surfaced this morning on the Ubisoft YouTube channel teasing the Season 3 pass. Interestingly, the representative also said that if the studio had been asked prior to season 2’s announcement if there was going to be a second expansion pass, it would have also said no at the time. It seems the developers may be struggling to gauge how popular their game is proving to be.

The teaser video starts with some text, “We have journeyed far across two seasons” with some 3D CGI footage that shows several cities representing expansion content to date, finishing up with a look at a desert-themed settlement that is meant to represent the recently released Land of Lions update. This is the game’s biggest content drop so far and brought the game setting to Africa. 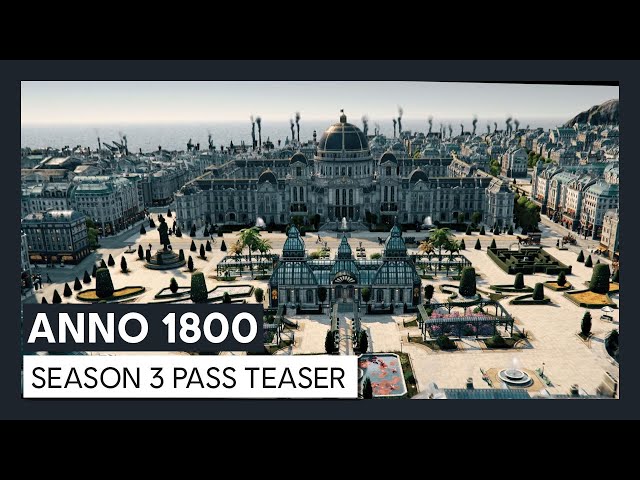 After that, the video moves on to the Old World, a sprawling European-style settlement with the grand palatial building in the centre from the Seat of Power expansion. You’re then shown a sign that shows a steamship with the words ‘Welcome Home’ on it. Then the camera rises and pans down, and it turns out that one of the buildings looks like the number three when viewed from the top. Minds were blown.

Other than the sign – which if you cared to speculate could hint at something warfare related – there’s nothing much to note. It’s a teaser, and the new content isn’t due till next year so we’ll have to wait for more.