Right, new Anno 1800 DLC! I’m excited; Anno’s model is an example of DLC done right. It just works for a game like this. It’s like, yeah, the vanilla game’s core loop is already practically endless – even when you get to investors and fulfil all their needs or host a World’s Fair, there’s always something else you can do – but Ubi has done a great job adding new systems that hook into that loop and are also endless.

Hm. I’m never going to finish this game, am I? Funny, I don’t think of it as an endless game, like a Sims or even a SimCity. Why is that? Anyway, I’m stoked for palaces. This is a perfect opportunity to start building out my Crown Falls island from the Sunken Treasures DLC, which has just been sitting there, all blueprinted, in my sandbox game for months.

But first: to blueprint my Palace. I’ve seen the promo shots, I know what I want. It’s a palace; you go big or you go home (presumably, home is somewhere that’s not a palace). I’m gonna map out a massive, sprawling estate. I’m gonna have internal courtyards and quadrangles to fill with gazebos and fountains. I’m gonna – oh. ‘Module limit reached’.

Huh. So I get 33 modules, and that’s apparently based on my global population (about 29,000). Fair enough, I’ll scale back my ambitions a bit. Just the one quadrangle… for now. 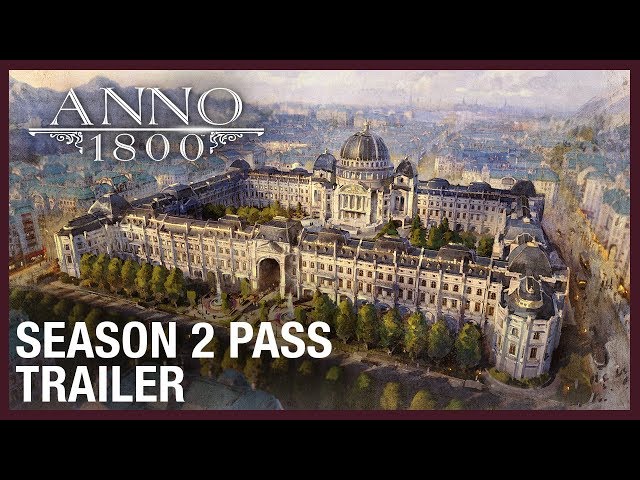 Right then, how much is that going to cost me – oh. Over 400 tons of timber, 500 of concrete, 800 of steel and bricks, over 600 windows, and 2.7 million bucks. Aaaand I haven’t even started populating Crown Falls yet. But I can’t possibly tear up my first island to accommodate my glorious design.

Oh well – it’s not like I’m starting from scratch. My other sessions are well advanced. I have cargo ships, airships, and almost 23 million in the bank. Time to roll up my sleeves and get to work.

I proceed to play for most of a day, shipping goods to Crown Falls and colonising half of Cape Trelawney until I can produce concrete locally, before realising that actually you can just build the Palace’s main building by itself and then add the wings one at a time, like you can with every other modular building in the game. 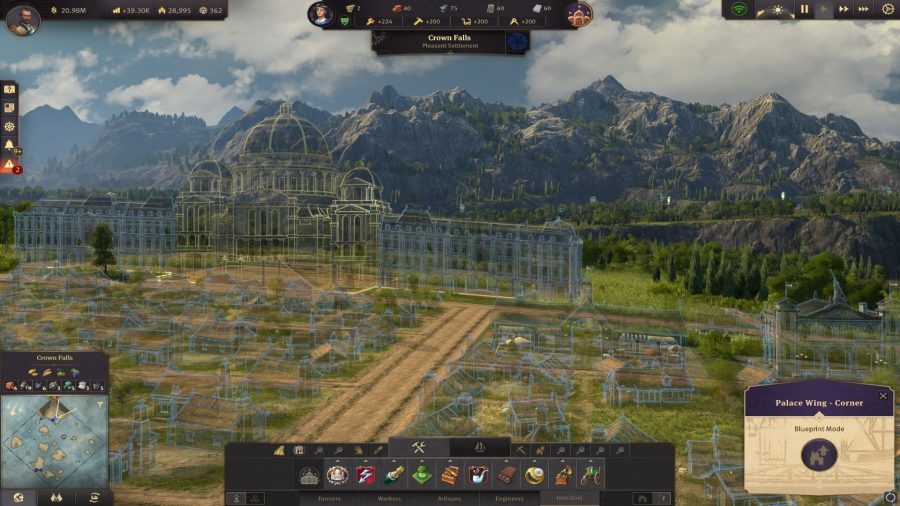 Duh. The main building is only a million and less than a third of the materials. I could’ve built it ages ago and enjoyed its effects while developing the island. Piss.

This is the most motivated I’ve ever felt to set out on expeditions for plants, animals, and artefacts

I build the Palace one wing at a time, having by now reached investors at Crown Falls and built half a World’s Fair. Ok, let’s see what this thing can do – I click through the Palace’s five departments and their policies and… well. Holy shit. There are some seriously potent benefits here.

I can reduce food and luxury needs. I can get bonus sockets for town halls, harbourmasters, and trade unions. I can extend power plant range or give 50% bonus electricity to production buildings. I can get better specialists at the public mooring, or halve the needed workforce at production buildings in range of trade unions! And I can build local departments on other islands – satellite offices that let me confer the benefits of a single Palace department elsewhere. 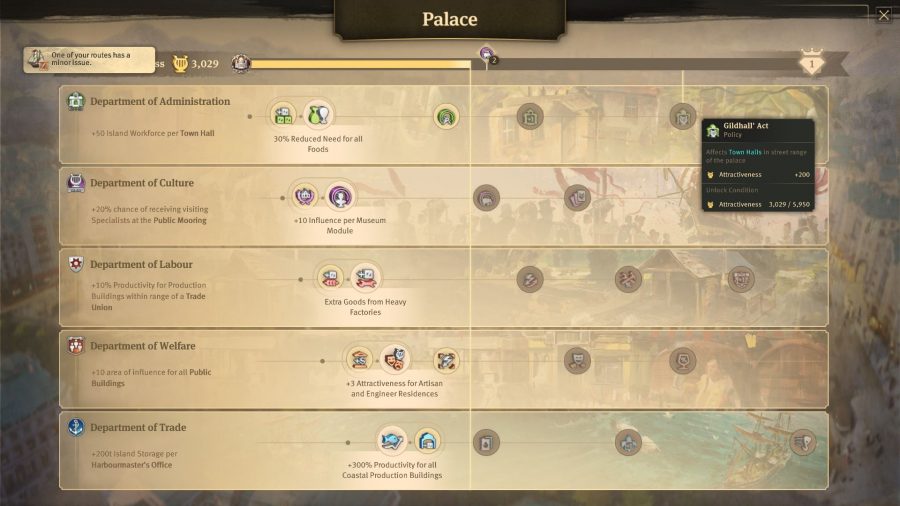 In fact, for builders, the Palace might be the best single feature that any piece of DLC has added to Anno 1800 so far. Accessing these policies is a powerful reward, and they unlock as you raise your island’s attractiveness rating. You can extend their reach by physically expanding your palace, which means you need to raise the cap on its number of modules, which you do by growing your population. Artistic types will find fiddling with its layout and beautification almost as satisfying as the botanical garden, yet because prettying up the island makes the Palace more powerful, the garden itself – as well as zoos and museums – become far more meaningful.

This is the most motivated I’ve ever felt to set out on expeditions for Legendary plants, animals, and artefacts – something I previously found too easy to ignore while cracking on with other things. When a zoological expedition comes back with three Legendary albino creatures, I get not only the usual collectors’ pride at my flourishing zoo, but a point of influence for any engineer’s residence within range of a town hall (which is all of them, as I spam town halls like Oprah spams cars). The Palace has immediately become an essential aspect of building my paradise city, both aesthetically and functionally. 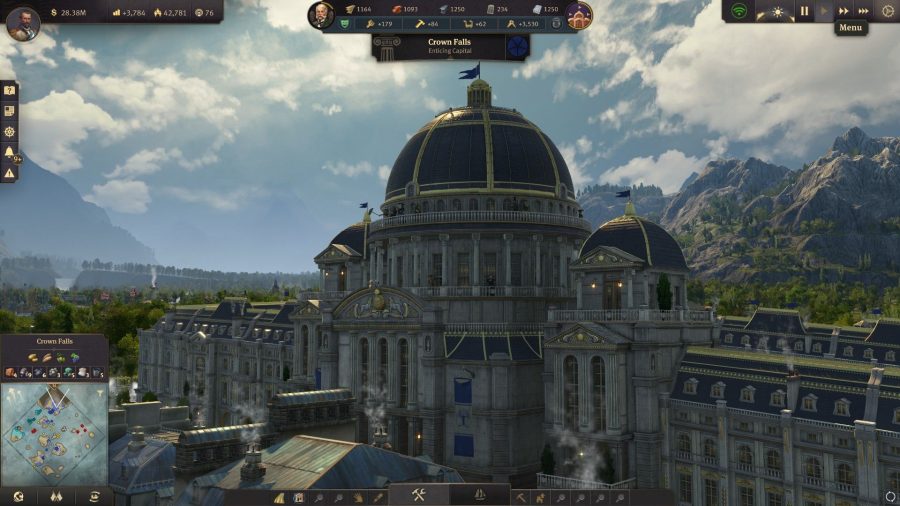 You can build a palace when you get your first Investor anywhere in your empire, and it’s expensive to build (though not as much as I’d first thought). This makes it a fairly late-game feature – if you like to test yourself against the harder AIs then it won’t make the difference in those crucial early stages, and there isn’t a military department to help out in a war – but once you do build it, it’s a powerful incentive for continuing to develop and beautify your empire throughout the game. Its most obvious home is on Crown Falls, where you can really take advantage of the space to build an imposing home, but it could easily fit on smaller islands too – one of its module types can cross roads, so I can see creative players weaving their palaces across town like snakes.

Huh. That sounds like a pretty cool idea. Maybe a little redesign… or wait, wouldn’t the palace look better with the main building in the centre and wings spreading out on all sides, enfolding an enclave of investors and high-end public buildings, like a palace district perhaps? And I hate the fact that I’ve built it on uneven terrain. Totally ruins the aesthetic.

I really am never going to finish this game.