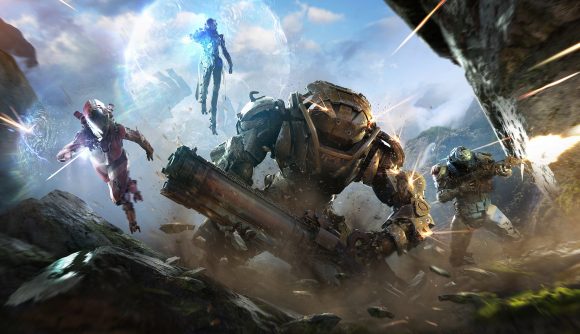 Anthem won’t launch with cross-platform play, according to executive producer Mark Darrah. So if you had dreams of playing alongside your console owning friends on day one, you might want to dial back expectations.

Curiously, Darrah doesn’t close the door entirely on the possibility of cross-play, but he may just be leaving a vague possibility on the table – especially as this is a quick response to a fan question on Twitter.

Cross-play has gone from dream to increasing reality over the past handful of years. Microsoft has brought down barriers between and Xbox and Windows players on its first-party titles, and even if that typically means dealing with the inadequacies of the Windows Store to take advantage of cross-play, it’s been a nice first step.

Sony’s opened the doors to wider cross-play too, finally allowing Fortnite to go cross-platform across every device, including competing consoles and PC. We still hope this progress is a sign of things to come, but the final word on Darrah’s Twitter confirms there won’t be any cross-platform fun on the Anthem release date.

If you’re hoping for something more concrete on Anthem, a new trailer will be wedged among The Game Awards announcements next week. In true 2018 fashion, there’s even a trailer for the trailer on.

I'm excited to welcome @CaseyDHudson back to #TheGameAwards next Thursday night to world premiere a brand new look at @anthemgame pic.twitter.com/MPlAVvwoN7

Check out all the Anthem Javelins if you’re hungry for more details on BioWare’s upcoming RPG. It’s a big departure from the studio’s previous games, and it remains to be seen if the new direction is truly worthwhile.