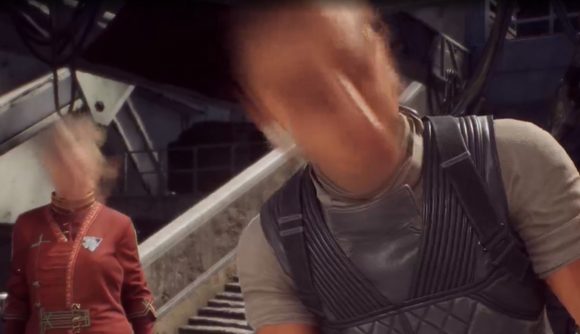 Okay, first: Anthem seems pretty good so far, and our experience with the game’s opening moments has been broadly positive, as you can see in our review-in-progress. But we’ve also seen glitches, including a ridiculous nightmare in which all of the game’s faces into clouds of shuffling quantum dust.

During our Anthem livestream, Caroline and Matt showed off the game’s opening hour. But from the start of character creation, it’s clear that, uh, something is wrong with the game’s faces. There’s a constantly shifting blur over those characters, from the customisable face of our Freelancer to all the people we meet in Fort Tarsis.

We’re still not exactly sure why the issue happened – both our drivers and the game were up to date, and it doesn’t seem that the bug has been widespread. Maybe we’re just lucky to have been gifted this glimpse at what a truly Munchian game might look like, with its characters screaming into an endless, sucking void until they’re consumed by it, victims of an uncaring universe and an unknowable abyss.

Or maybe the next patch will fix it. Either way, you can check out the Twitch archive to see it for yourself.

Players have been experiencing more broad issues with the Anthem server status today, but it looks like those problems are clearing up pretty quickly.

The Anthem release date is technically another week away, but today marks the start of early access for Origin Access subscribers. So if you’re eager to check out BioWare’s latest, now’s your chance.