Anthem wants you to move. It pulls you forwards, urging you to run or fly towards the next objective, sucking you into each new battle with the tempting confection of deeply satisfying, dynamic locomotion. This comes as a bit of a surprise to us after the game’s E3 showing, which made combat look stilted and, well, a bit stodgy if we’re honest.

What a lovely surprise, then, to find that our Ranger is so much fun to control. We can soar into the air and meter out moreish thrust to our heart's content – well, until the damn suit overheats, but that’s nothing that a carefully planned flight path through a waterfall or two can’t solve.

We can hover and take aim on the Scar soldiers and indigenous creatures below us. There’s a short-range – but effective if used properly – dash move that gets us out of trouble a few times. And then there’s that wonderful air-to-ground melee attack which lands with enough force to bother a fault line.

But the most profound appeal to uninterrupted motion is more subtle, buried away in an unassuming split second. Boost off the edge of a platform, or jump onto or over scenery, and upon landing there’s just a heartbeat before the boost kicks back in again without waiting for you to hit the button. It’s a small quality-of-life adjustment, but one that we wish more developers would implement. This tiny change allows you to thunder across Anthem’s vast landscapes and cave networks without having to worry about all that momentum-sapping geeing up.

Anthem’s gunplay feels pretty great, too. Our Ranger’s rifle isn’t particularly powerful, but in combination with the Javelin unit’s force push and some frost grenades, the odds start to shift in our favour. And that’s before factoring in our three teammates and the combos that are possible with a communicative squad. One player could freeze a bunch of Scar soldiers, for example, before another crashes down with that thumping air melee attack and shatters them. Get frozen yourself – or, much worse, stuck in alien spider webbing – and a friendly flame thrower session will set you right.

All of this action builds our ultimate attack, too, allowing us to unleash powerful AoE attacks on enemy groups. Our Ranger, for example, can paint multiple targets before flinging a volley of homing missiles their way.

That will be needed for Anthem’s (inevitably) huge bosses. As Gamescom’s brief appointments don’t accommodate full raids, we’re skipped to the end of one of the game’s Stronghold Dungeons to meet its oversized arachnid guardian. 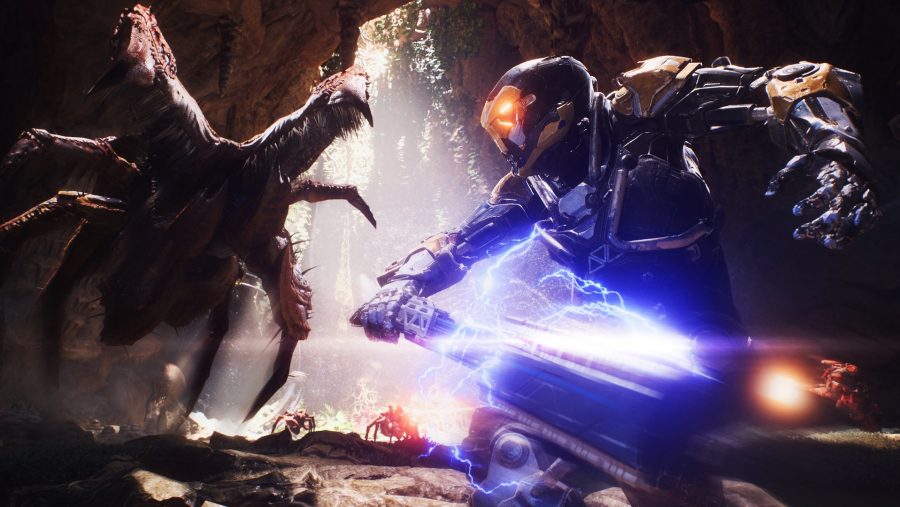 It leaps about the place, flinging acid spit and quickly scuttling towards anyone silly enough to stand too close. It also periodically releases mobs in the form of baby spiders – terrifying, person-sized baby spiders, you understand – and sports an extremely large health bar. It’s a tough and long fight, but it feels dynamic and pacey in a way that these kind of bullet sponge bosses rarely do. Being able to fly about the place, carefully comboing attacks with your crew, makes for a fight that has legs. Eight legs. No? Ok, we’ll stop.

Anthem promises much in this brief showing. We can’t wait to play more and experiment with the other player classes as the Anthem release date creeps closer. For now, though, we’re going to seek out some spiders in our dusty shed with which to do battle while we wait.