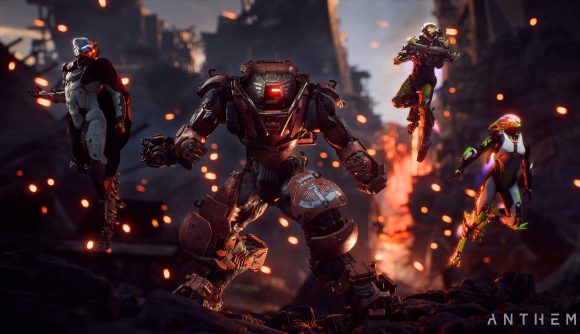 You may be pleased to learn that you won’t be fighting over loot drops with other players in Anthem. Lead producer Ben Irving has confirmed that players will get individual loot drops on missions, so there won’t be any need or greed rolls on what gear you find when playing with others.

I still remember with anger the times people ninja’d great loot from under me in World of Warcraft dungeons, even when they clearly didn’t need it for their hunter builds. Yeah, Greg, I’ve not forgotten. It’s a sensible decision then, especially as Anthem is leaning so strongly on cooperative play. It can really undermine teamwork when players are both working together and in it for themselves.

The loot detail was revealed in a Reddit post alongside the news that after a closed alpha test Bioware is doing “a pass on the frequency of loot drops”. So, loot fans can also look forward to more drops in general.

“Loot is critical to upgrading your javelin and leveling up,” Irving wrote. “Alpha players let us know that during their time in Anthem, loot drops weren’t frequent enough and were hard to spot out in the world. We’ve done a pass on the frequency of loot drops and will look for more feedback in future tests. We’re also investigating a way to make loot drops more visible in the world so they’re easier to find.”

Irving went on to add that “All loot is personal (not shared with the team)” the team is making “tweaks to ensure that’s clear”.

The loot you find from a mission is all accessible when you return to your homebase at Fort Tarsis.