BioWare’s next big game is Anthem. But it’s not due out until February 22, 2019. That’s a long wait, especially if you’re eager to jump into this “science fantasy” world and have already exhausted all the video footage – so what else can you do to bide your time?

It’s simple: play one or more of the games like Anthem. First, we need to figure out what Anthem is. EA calls it an action-adventure game. But it’s much more than that. It’s a looter shooter, which means it has plenty of RPG elements – classes (realised as mechanical suits called Javelins) and upgradeable skills – but it also takes place in a shared universe. You can play it solo, sure, but it’s best played online with your friends.

Need something else to play with your mates? Check out the best multiplayer games on PC.

This is not a new idea. In fact, as you are about to see, Anthem belongs to a whole lineage of games in this style. These are huge titles which, if you haven’t already played them, will give you plenty of hours of entertainment – get ready for lots of shooting, looting, and character upgrades. Here are the games you should play as you wait for the Anthem release date to arrive. 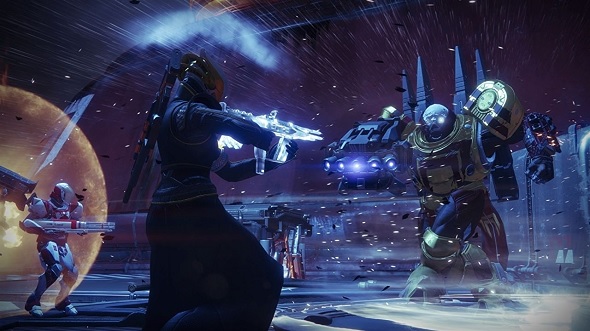 Anthem’s biggest competitor is Destiny 2. Bungie’s sci-fi shooter sequel practically has the same DNA: it’s all about shooting aliens, grabbing as much loot as possible, and high fiving your mates as you smash a particularly difficult raid together. In fact, if you play as the Titan class, you even have access to a jetpack.

What you shouldn’t flock to Destiny 2 for is its story. We’re hoping Anthem will have it beat hands down there. That’s fine: Bungie is known for its punchy guns, thrilling shootouts, and epic set-pieces. Head into Destiny 2 expecting colourful action set against a beautiful backdrop of large-scale alien architecture and you’ll have a good time. Like Anthem, Destiny 2 juxtaposes the shooting with natural grandeur – or what passes for natural on the planets of Destiny 2, with their methane seas, giant tree roots, and milky white rivers.

Once you’re through the campaign you’ll then have all the endgame activities to pursue. Grab a squad and get grinding for loot so you can be effective in the strikes, PvP, and eventually raids. If you need more Destiny 2 then the game has it in spades – it already has the Curse of Osiris and Warmind expansions available, and Forsaken will soon bring plenty more. 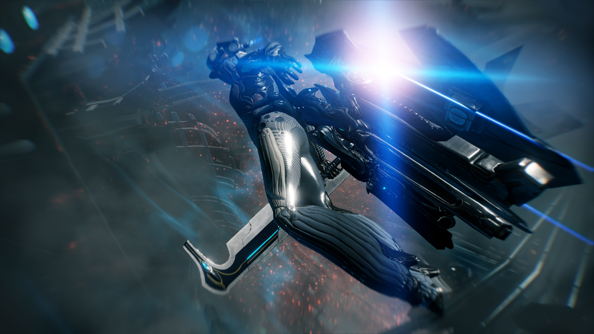 If Destiny 2 is Anthem’s cousin then Warframe is its sibling. It, too, follows the action-packed stories of a bunch of warriors who wear powerful biomechanical suits (called Warframes) to fight against the alien species threatening their existence. Online co-op is encouraged as you’ll be embarking on hundreds of quests that send you across the galaxy, shooting up vast numbers of teeth-gnashing beasts, robot soldiers, and human clone armies.

If you’re really into Anthem’s free-flying mobility then Warframe can help satiate you with its Archwing missions. These mechanical wings attach to your suit and allow you to fly around space, where you’ll shoot the heck out of anything that gets in your way.

As with Destiny 2, Warframe has PvP to add a competitive alternative to its stellar co-op. It also has The War Within, Plains of Eidolon, and The Sacrifice expansions ready for you to play right now. The incoming Railjack and Fortuna expansions will see the game not only get bigger again – with massive space battles and an extra open world – but refine it further, synchronising mission structure that spans both terrestrial and space environments.

Oh, and let’s not forget, Warframe and its expansions are free. You don’t have to spend anything unless you spot a cosmetic you cannot be without. 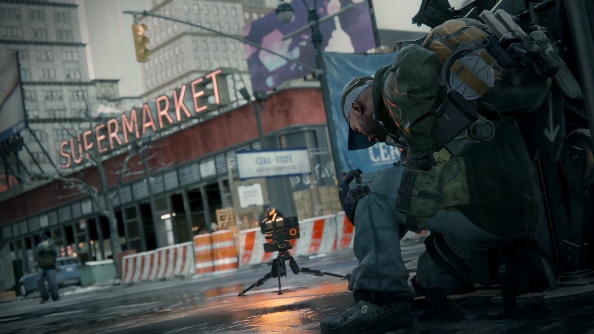 No aliens. No power suits. And it’s set in modern-day Manhattan. What’s Anthem about The Division? Don’t focus on the white-and-grey city streets and instead look at the action that’s happening upon them. Do you see it: the guns, the gear, the squaddies barking orders and jokes at each other?

The Division takes place in a shared online world and, above all, wants you to behave like any good New Yorker during a riot and loot every building in sight. The game is heavy on the gear, which you can buy with experience points or craft from materials found across the urban sprawl. We’re talking body armour, backpacks, gloves, knee pads, and masks.

While the fashion is questionable, The Division will tap into those rich veins that run through your body and lust for the grind. It’s a superb co-op shooter that was given a huge overhaul at the beginning of 2018 that makes it more accessible to new players. It also has the Dark Zone if you need the challenge of PvP for a change.

More than anything, The Division bodes well for Anthem’s storytelling ambitions. In among the shootouts you’ll find echoes – 3D holograms constructed from surveillance and smartphone data that reconstruct past events in New York’s streets as digital vignettes. If the Anthem team can integrate anything as affecting into their missions, it’ll be onto a winner. 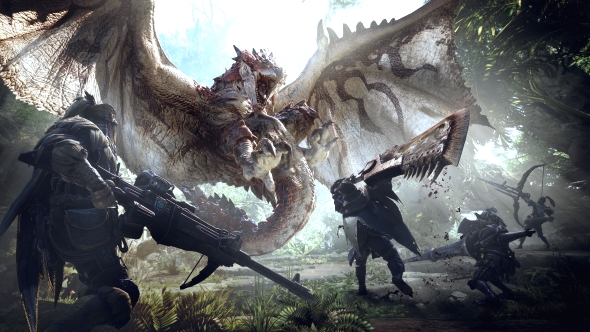 In the Anthem gameplay videos to come out so far we’ve seen a couple of titan-sized enemies that will present the game’s harder fights – best faced with a team at your side. In one video, the Freelancers flee from one of these giants as they can’t reliably take it down at their current level. It’s behaviour that any Monster Hunter: World player will recognise.

Monster Hunter: World is all about heading out into the wilds to take on gargantuan beasts. They each have their own aggressive behaviour and weaknesses that you need to learn and exploit. If you’re able to break or cut off certain body parts – a tail, for example – then you can use it to craft more powerful weapons and armour.

It’s not a shooter (unless you opt for a bow), but Monster Hunter: World has the same interest in big and nasty beasts, online teamwork, and lust for loot that Anthem has displayed. 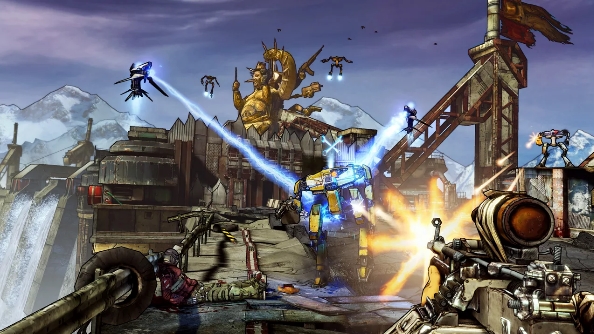 The Borderlands series is probably to blame for the looter shooter’s current popularity. These are first-person shooters that emphasise RPG mechanics more than the skill-based aiming accuracy of their genre peers.

Killing Borderlands 2’s lunatic wastelanders isn’t so much a matter of whether you landed a headshot or not – although, that helps. Instead, each gun has numbered levels (determining firing speed, reload speed, damage type, and more) and a colour-coded rarity, which means you need to find weapons with better stats as you progress in order to survive the shootouts.

Developer Gearbox Software claims that the first Borderlands game has 17,750,000 gun variations due to its use of procedural generation. Borderlands 2 is said to wipe the floor with that number. So if you’re a bit of a gun nut and go spare for loot then Borderlands 2 is a good pick. It has online and local co-op for up to four people, too, so you can practice your teamwork – as well as the art of picking up on the story being told to you without listening to all of it. 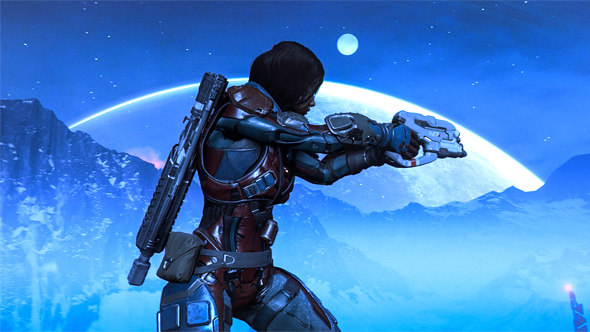 Yes, this is a curveball. But consider that Mass Effect: Andromeda is the game BioWare released directly before Anthem. It’s possible that they share some ideas and mechanics. To be precise, the cover-based combat of Andromeda seem to lay the foundations for Anthem’s gun-toting, companion-supported showdowns.

Beyond that, Anthem has two single-player hubs, the main one being Fort Tarsis, which is where you’ll select missions and build relationships with NPCs through choice-based dialogue. You’ll find a hub with the same purpose in Mass Effect: Andromeda.

If you want to get a feel for the ideas and interactions that BioWare is building on for Anthem you should play through Mass Effect: Andromeda. It’s really not as bad as those shoddy animations that were being paraded around on the internet make it look.