Anthem Colossus builds come in one shape and size: big and chunky. But, while BioWare’s tank mech is not as agile as the other Anthem Javelins, its many layers of thick-set armour mean that it can hold its own even amid the most devastating of enemy gunfire. But, to best weather the aggro, you’re going to need to effectively optimise your Anthem Colossus build.

That said, the Colossus isn’t just about its defensive capabilities. This beast can equip every type of heavy weapon to ensure you can blow everything away with extremely high damage to make up for your relative lack of mobility. It’s the Colossus’ potent mix of high damage and resolute armour that makes this battle suit such an important asset to your team.

Of course, this is the only the beginning of what Colossus can do. As you develop your tank character towards Anthem’s endgame, the sheer range of possibilities at your disposal to help you take on the game’s toughest tasks will become clear. For instance, you could set up your Colossus to prime and detonate combos to maximise damage without relying on your team. Note: these builds are not complete, but we will be updating them once we have had more time with the full game. However, this guide will introduce to you the different options you could pursue to help you find the Anthem Colossus build to fit your playstyle.

Anthem combos allow your team to deal significant damage, but to pull them off you need a primer and a detonator. However, if you’re playing solo – or just greedy – you can optimise your Anthem Colossus build to perform both parts necessary to execute a combo. This works especially well with the Colossus: if you successfully execute a combo with it, you’ll trigger an AoE explosion. Our favourite means of doing so is by merging the power of Lightning Coil and Flamethrower. This is an effective gear synergy first noticed by Arekkz Gaming, so all credit to him for that.

The Flamethrower is a heavy assault launcher that does pretty much what it says on the tin, and it primes targets by igniting them. It’s a great way of cutting through weaker mobs and laying waste to shields on more powerful foes.

The Lightning Coil, however, is an ordnance launcher that unleash electrical AoE damage. It is one of the few launchers that can be used with your Colossus’ shield up, and it’s not to be confused with the Shock Coil, which is a primer. Crucially, the Lightning Coil is a detonator that completes a combo on your nicely-singed enemies. If you like this weapon, look out for the blistering Masterwork variant, Vassa’s Arc, which sets off electrical explosions following multiple hits.

So, what better way to complete this Colossus combo build than by boosting these specific elemental powers? Thankfully the Overclocked Regulator component does just that as it increases lightning and fire damage by 35% of base damage. Equally, once you’ve unlocked more component slots, you can bolster this build with the Colossus Combo Augment component: this increases combo damage by 50%. Plus, the Masterwork version, Catalytic Overdrive, increases ability damage by 40% for 20 seconds post-combo detonation.

When it comes to a high damage Colossus build in Anthem, it really depends on whether you want to focus on clearing trash mobs or single, more powerful targets. This build is for the latter and it best helps you to face down enemies with yellow health bars while the rest of your team can focus on the little guys.

For this reason, the Railgun is an excellent bet. This charged heavy assault launcher deals huge impact damage when trained on a single target, and it’s also a detonator. The High Explosive Mortar is an ordnance launcher that also functions as a detonator, making this a potent combination.

As you progress towards endgame, be on the lookout for the following masterwork components. Chief among these is the Synchronized Frame which, when it’s used to defeat an enemy your ability damage is buffed by a massive 60% for five seconds. Whereas Stalwart’s Badge is a handy component when you’re in a pinch: if you suffer a shield break, this bit of gear activates to imbue you with an additional 40% of damage for five seconds. 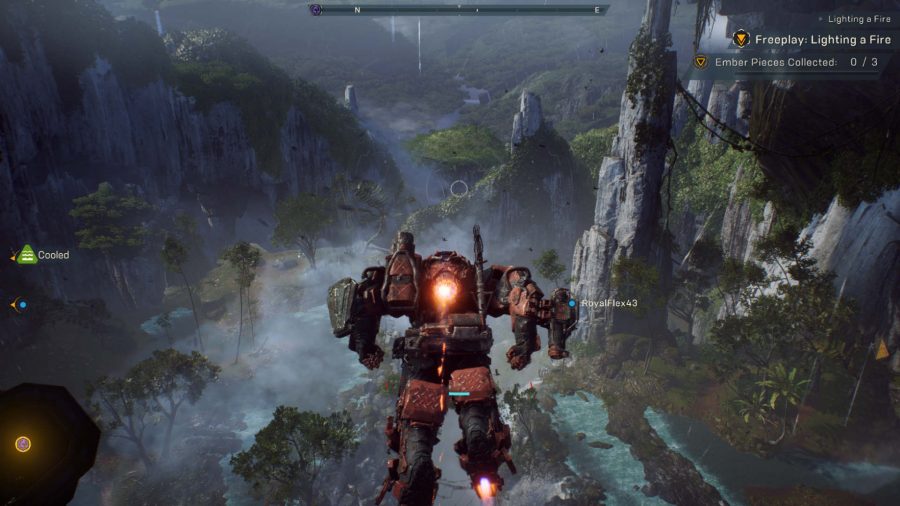 This support build will make your Colossus invaluable to any team. But, while Shield Pulse – which reduces damage to nearby teammates by 33% – is handy, we’re going for Battle Cry in this case. This emphasises Colossus’ tank potential by attracting enemy aggro away from your team to your mech, so be prepared for some punishment.

That means we need to buff your defensive stats. For that the component Structural Reinforcement is your best bet as it heavily reinforces your armour and shields. With this backing you, you’ll have much more joy charging into the front lines with your shield up. Also, the masterwork upgrade, Ablative Shielding, increases damage resistance for five seconds after a shield break, to help you fight your way out of trouble.

The remainder of this support Colossus build highlighted above is made up of two masterwork items. However, they are such an excellent combination in any build so we highly recommend looking out for them. First, there’s the Voltaic Dome, the rarer version of the Shock Coil ordnance launcher. The reason why this is a great support weapon is, despite its relatively disappointing damage for an exotic boomstick, it freezes enemies to the spot. This both primes targets and prevents them from attacking your team for a spell.

The other piece of masterwork gear is Best Defense, the upgraded variant of the Siege Artillery heavy assault launcher. While the more common version merely boasts explosive combo capabilities, Best Defense replenishes 35% of your armour with a direct hit to help you protect your teammates for longer.