What is the best Anthem Interceptor build? It’s certainly a question that will be burning on the mind of players looking to dive into BioWare’s grandiose space romp who sway toward the space ninja persona. True to that archetype, the Interceptor is a swift and sleek assassin who can call upon close-range gear abilities and dual-knife attacks to ensure lethality in confined spaces.

The Interceptor does come with a trade-off, however, and can be considered a glass cannon due to its fragile nature. Due to a lower than average health and armour pool you’ll want to utilise your skill-set to stay on the move. Also, you’ll want to be wary of bigger enemies like Titans and Stronghold bosses who will stomp you out at closer ranges.

The Interceptor truly thrives against groups of enemies where you can jump in and deal damage while buffing the entire team. To help you tailor your game to those strengths we’ve whipped up a handy guide to the Interceptor and some builds to get you started.

Any great combo in Anthem starts with priming the enemy for a detonation attack. With the Interceptor, you’re going to want to start with the Venom Bomb as it affects a wide area and inflicts the acid debuff, which does damage over time and reduces enemy resistances by a third. Another bonus is that you can fire the bomb at mobs while you’re on approach before going in for the kill.

If you’re looking for something that’s more effective against the more hardened baddies rather than the mob, then Cryo Glaive is something you may want to think about. The ice-themed ability freezes a single target and prevents them from dealing damage for a short spell while giving you an ice aura when detonated. Another benefit of denying enemies damage dealing capabilities for a few seconds is that it may just provide a large enough window for you to get away. 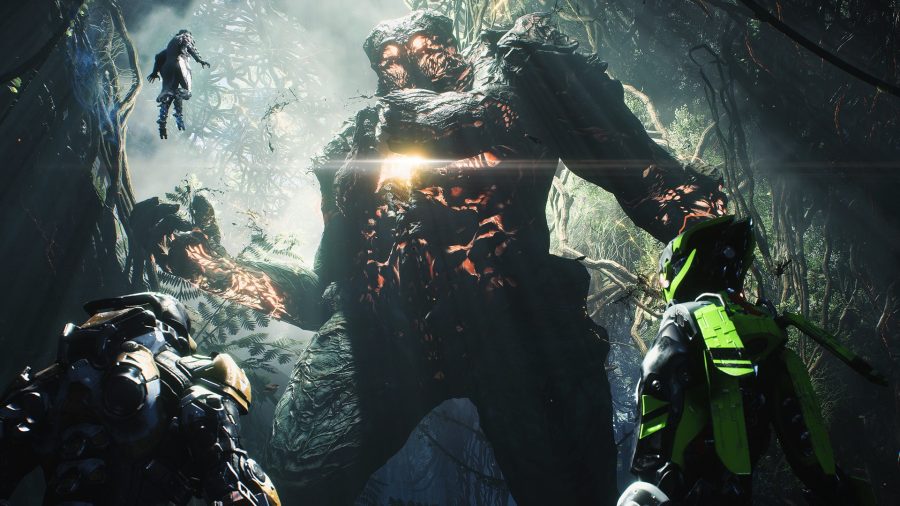 One of the runaway favourite abilities in the early-meta for the Interceptor is the Tempest Strike. The aerial roundhouse kick sends you spiralling into your foe heel first and will detonate primed enemies. On top of that, it also gives you an elemental aura. Another cool quirk of the Tempest Strike is that the ability won’t go on cooldown until it has landed, meaning that if you launch it in mid-air you can cancel the animation with a jump.

Pairing the Tempest Strike with the Venom Bomb has proved an early favourite among players as it allows the Interceptor to slice their way through hordes of weakened enemies. As your melee attack is also detonator, you can get to work on the rest of the mob once you’ve landed the Tempest Strike, too.

You can also launch a Target Beacon at a tough enemy so that your whole team deal additional damage.

Finally, when it comes to weapons your primary should be Vassa’s Surprise, which works beautifully with a melee-focused class like the Interceptor as it will reload your magazine after striking an enemy with your melee attack. The Rolling Carnage shotgun buffs your damage whenever you dash, making it a great weapon to enter the fray with, so take that as your second pick.

If you’re at the Anthem endgame then you’ll want a build with a bit more detail and damage potential, which is where this ridiculous Interceptor build comes in. Making use of the Target Beacon support ability, which amplifies single target damage on the enemy you attach it to, the rest of this build is all about stacking buffs in order to deal damage in the millions. This build also makes use of endgame gear like Masterworks and Legendary weapons, so it won’t be easy to adapt.

Nearly every part of this build revolves around a damage buff: Ruthless Striker, Sudden Death, Target Beacon, Glorious Result, and Truth of Tarsis all buff damage in some respect. Add the right Components on top of that – anything that increases critical damage rolls – and you’ll hit single targets for an astonishing amount of damage.

But there is a careful setup to this build that makes it even stronger, especially against bosses. First you’ll want a teammate showering the boss with and Acid elemental to debuff their armour, then you’ll want to throw down your Target Beacon followed by the Ruthless Stalker, which will both increase your damage output on the boss for the next 20 seconds. To set it all off you’ll need to unleash two hits from the Glorious Result, swap to Truth of Tarsis for a critical hit, dash (if you have the Elusive Talisman then this will reload for you), and unleash another shot before the buffs wear off.

If used correctly, you can pretty much one-hit most bosses, making this one of the best Interceptor builds for Stronghold runs. Of course there is a hefty downside in how susceptible this Javelin build is to incoming fire, but a good Freelancer will have no problem mitigating this.

Combo breaker: How to use Anthem’s primers and detonators

So there you have it, the best Interceptor build to get you started in BioWare’s Anthem. If you’re struggling to mech up your mind and would like to try out a different Javelin, then our Anthem Ranger build guide is here. If not that, then maybe BioWare’s big mech boi is more your speed. If so, our Anthem Colossus build guide awaits you with open arms. There’s a lot to get acquainted with in BioWare’s latest space exploration, but the swathe of Javelins embody an array of personalities that’ll leave something for everyone.