Looking for a strong, simple Anthem Ranger build to get the most out of this jack-of-all-trades Javelin? The Ranger’s strongest asset is its combo bonus, which deals additional damage to single targets, making this the best Javelin for taking down bosses and well-armoured targets like turrets, especially if you can land all of that damage on a weak spot.

As the Ranger, you’ll struggle against crowds of ads, but excel against tough targets, making this the most difficult of all the Anthem Javelins to play solo. We’d recommend bringing a weapon like an assault rifle or grenade launcher that can help out with crowd control when you’re not landing critical hits on tougher enemies.

To assist you at the start of your Freelancer career we’ve assembled a couple of quick and easy Anthem Ranger builds for you to experiment with and start dishing out high damage combos. Bear in mind these are not complete builds with every Component and weapon carefully thought out, just basic combos you may not have considered that will give you an edge in boss fights and teach you the fundamentals of the Ranger.

We’ve also set these up primarily as self-combos, so you won’t have to rely on your teammates to start handing out hefty combo damage. Enough with the flimflammery, here are some Anthem Ranger builds to get you started.

The Pulse Blast ability is very underrated, but is actually one of the best damage-dealing abilities in Anthem. Why? Unlike some of Ranger’s flashier abilities like the Seeker Missile and Blast Missile, the Pulse Blast can be aimed properly, allowing you to target weak points and land critical hits. Stack that with the combo damage and Ranger’s combo bonus that deals extra damage against single targets and you’ll be dealing a few thousand damage with every shot.

Get crafty: Here’s how the Anthem Forge works

Naturally, weak points are tricky to target, which is where the Frost Grenade comes into its own, freezing enemies in place while also priming them for the Pulse Blast detonator. Grenades are also AoE primers, allowing you to then select a single target in a crowd if you’re up against multiple enemies.

The Pulse Blast also recharges very quickly, making it a viable when fighting a lot of enemies at once. This is a low-level build, but one that effectively unlocks the Ranger’s combo bonus and gets you thinking about how best to stack damage bonuses.

When it comes to your Support Gear, it’s really up to you whether you run the damage-buffing Muster Point or the defensive Bulwark Point. If there’s a really tough enemy with an exposed weak point then the Muster Point will help you and your team amplify their damage output, whereas Bulwark Point is a reliable way of assisting your team while you jet off to land crits.

This Ranger build is all about the Devastator, a sniper rifle capable of dealing exceptionally high damage on its own, and even more damage when the enemy has been appropriately debuffed.

As the enemy is already primed, you can also detonate them with the Sticky Grenade, which deals the most single-target damage of all the grenades. Pop down a Muster Point before triggering all of this and the damage multipliers will net you thousands of points of damage per hit.

As Arekkz points out in his guide to the build, you can stack Muster Points together for absurd damage multipliers, and even cap it all off with one of the Interceptor’s Target Beacons if you’re chasing a one-hit kill.

This build is highly adaptable for dealing with groups of enemies as the Venom Darts will still do an excellent job of priming and debuffing ads. Bring a secondary weapon like an assault rifle along to mow down these mobs, then detonate any stragglers with a grenade. 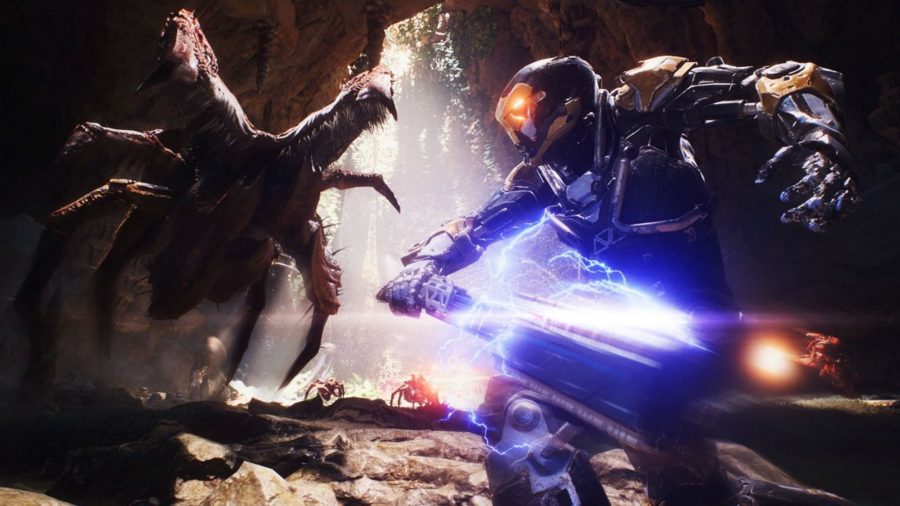 This is a very simple Ranger build that’s surprisingly effective. All your priming is done through melee strikes, while you can switch between the Seeking Missile for high single-target damage combo, or the Frag Grenade to clean up groups of primed ads.

As you’ll spend so much time battling enemies with your melee strikes it’s good to have the Bulwark Point as you support gear should you need to retreat in a hurry. But for the most part this Ranger build is all about rushing in, priming an enemy then taking a step back to detonate them. As you have two detonators it’s easy to deal a constant stream of damage through combos.

Intercepted: Here’s an Anthem Interceptor build to get you started

You can flesh this build out with Mastercraft weapons like Artinia’s Gambit, which deals explosive damage whenever you reload, which makes it possible to constantly chain combos in close-quarters. If you need help grinding towards Mastercraft weapons then check out our Anthem leveling guide. Otherwise, a sniper is also very helpful with this build so that you’re not totally useless in situations where you can’t afford to be in the thick of battle.