There is an excellent game in Anthem, somewhere. Rich, in his Anthem PC review, characterised its potential as a “glimmer”. That flicker of promise can be felt when you start a mission on a precipitous ledge, with the vast expanse of Bastion’s beguiling world dragging you in by your battlesuit booties. Then there is the relentless thrill of kickstarting your Javelin into flight mode with an earth-shattering boom. It’s there when you plunge into the water to cool your overheated jets before taking revenge on your enemies with sublime skill. In many ways, with Anthem, BioWare perfected the art of flight.

These moments never fail to enthral; they should be the trigger that pulls in players for the hundreds of hours service games require to sustain themselves. This entrancing promise shows itself early, but it becomes something many Anthem apologists – myself included – try, and fail, to grab hold of. Sadly too many obstacles threaten to suck the fun from a game that has the potential to be be good one day.

Fixes for the campaign-halting Tombs of the Legionnaires have been implemented, for instance, and the day-one patch went a long way to easing the growing pains of BioWare’s looter shooter. However, there’s one problem that cannot be expunged with a simple patch: Fort Tarsis. Your unhappy home is a single-player hub that smothers the game’s best moments, threatening to make Anthem’s glimmer fade.

Anthem’s Fort Tarsis should be a perfect contrast to the rough-and-tumble joys of combat. But the towering fortress that keeps the last remnants of humanity safely away from the bluster and fun of the outside world is blighted with an unsettling atmosphere that’s thick with deafening silence.

Bizarre small talk cuts through the quiet as you wander through what feels like a hushed puppet show – NPCs shuffle on the spot as if being shocked by a weak, but bothersome, taser. It feels very empty, too, which makes one NPC’s complaints about foot traffic through the main thoroughfare faintly ridiculous.

Many BioWare loyalists pinned their hopes for a Mass Effect and Dragon Age-style experience on Anthem’s vaunted conversations and world-altering choices. But the reality is that, while the star-studded cast’s voice acting is often excellent, the topics you discuss are vapid and the game struggles to maintain even the illusion of choice.

When a character, Neeson – played with effective creepiness by Brooklyn Nine-Nine’s Joe Lo Truglio – offers to bitch about your fellow Freelancers, your choice is basically ‘no’, or ‘hell no’. It’s a far cry from the consequential, albeit binary, Paragon/Renegade system Commander Shepard engaged in.

That’s not to say there aren’t fun tidbits of story hidden in Fort Tarsis. In fact, compared to the original Destiny’s Grimoire cards – lore readouts only consumable on a separate dedicated website – Anthem’s pockets of background information, dotted throughout the hub waiting for story-hungry players to pick up and read, are practically slapping you in the face.

With Anthem’s troubled launch state in mind, BioWare could learn much from another looter shooter: Warframe. While Digital Extremes’ service game also suffered in its original form, Warframe now flourishes by listening carefully to its vocal community. It’s a model BioWare should wholly embrace.

Nevertheless, there are some amusing anecdotes to be found, including a collection of passive-aggressive code of conduct notes about pickle consumption in the workplace. For the record, I am resolutely against such brazen anti-social behaviour. But, revolting breath aside, there’s an unmistakable sense that a decent story lurks somewhere amid the awkward silence. BioWare’s writers might be able to realise it were they not wrestling fruitlessly with the service game cage that imprisons them.

Anthem’s narrative canvas is somewhat intriguing, but the main story thrust of your airborne adventure is hollowed out by its nature as a co-op game. The Normandy worked as a cathartic post-quest space because, ultimately, you reminisce and solve disputes with characters that joined you on the front line. Shepard’s galaxy-conquering vessel was the place in which both awful and awesome mission memories were consummated with crewmates – and not just figuratively.

In Anthem, however, you mostly chat with Cyphers – gifted humans that communicate with their Freelancer from Fort Tarsis – and then smash up baddies with online teammates. As a result, there’s little reason to care about characters such as Owen, who languishes back at the fort, irrespective of how charming he may be. In Fort Tarsis everything is about me, but any narrative momentum established in this space is diluted when I awkwardly venture out with mute randoms. 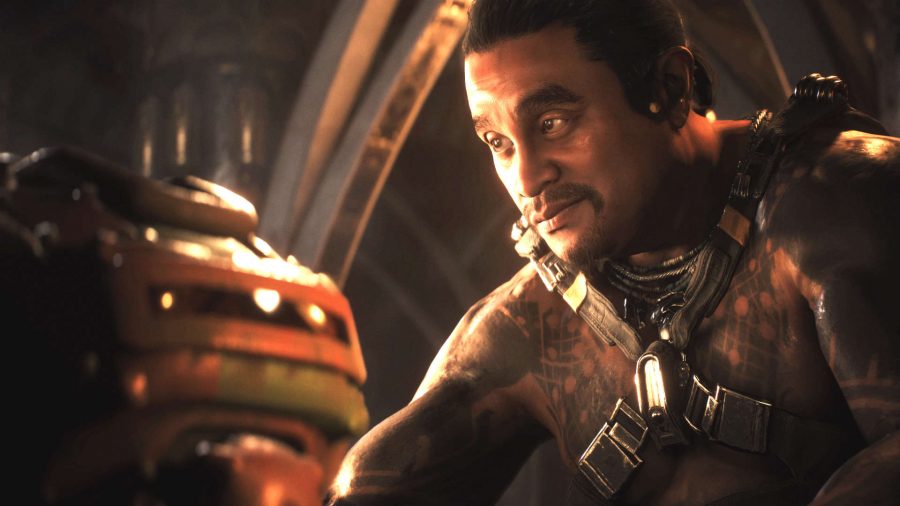 Rhythm of the plight

Many of these issues would be ameliorated if we didn’t have to go there all the damn time. Stirred by the discovery of your first Masterwork weapon? You need to go back to the fort to equip it. Want another main mission? It’s Tarsis time, I’m afraid. Want to level in Anthem in the most efficient way possible, circumventing the freeplay XP cap? Yeah, you know the drill.

As a result Anthem’s rhythm is all wrong. Just when I’m getting into the flow of combat, of expertly marshalling my exosuit’s abilities and pulling off satisfying Anthem combos, the game irritatingly calls me back home for tea. It’s that or no loot for dessert, mister.

Anthem is like a boardroom argument made manifest as a videogame

The pick-up-and-play aspect of Anthem’s short form contracts is an important part of a service game’s loop, but the enforced yoyoing exacerbates its problems. Worse still is your movement speed – this, at least, has been increased since my first Anthem hands-on in January, but it’s still agonisingly slow. Fort Tarsis feels like it’s jealously hoarding you, trying to keep you from the wider game’s best parts.

In trying to “solve” storytelling in live multiplayer games, BioWare has instead made two separate ones. Unfortunately, their interdependence risks scuppering the merits of both. In the end, with a talented writing team on one side and today’s emphasis on hobby games on the other, Anthem feels like a boardroom argument made manifest as a videogame.

Build me up: Here’s how to get the best out of your Anthem builds

By touting Anthem as a story-focused game to existing fans, while also trying to court progress bar-filling fiends with a looter shooter, EA is attempting to have its cake and eat it. It may be time for Anthem’s creators to choose which aspect of the game they value the most.