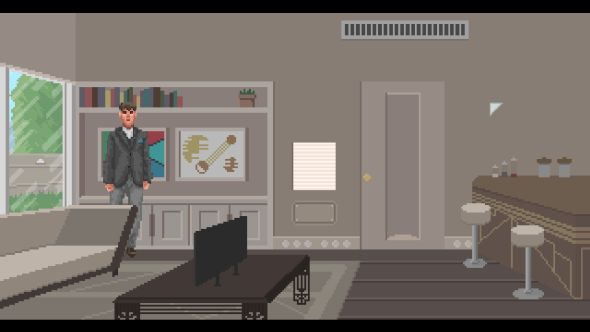 Lewis Denby, co-creator of well-received indie adventure game Richard & Alice, has announced his new project. Titled Anthology, it will be a collection of short adventures set at the same time, on the same day, in the same distant city.

For more emotional passion projects, try something from our list of the best indie games on PC.

Anthology’s five stories will each be point-and-click adventures (though Denby assures us their logic will be sensible and Earth-based, rather than lunar). Each adventure will last 15 to 45 minutes, and will explore the story of a strangely familiar world, its sprawling capital, and the lives of its citizens. The individual stories will gel together to reveal a bigger picture.

“It is both exciting and daunting to jump back into the world of game design, having spent the past several years promoting and producing other people’s games,” says Denby, in a press release.

“I’d love to say that Anthology is the culmination of many years of ideas, but it simply wouldn’t be true. I had an idea for the game in October last year and decided it probably had legs. And I was lucky enough to manage to convince my two wonderful collaborators that it was an idea worth making, so here we are.”

Those collaborators are Khaled Makhshoush, who is providing background art, and Francisco Gonzalez. Gonzalez made A Golden Wake and is now also working on Lamplight City, and will provide character art and animation.

For more information, you can check out Anthology’s listing on Steam Greenlight here (and vote for it, if you like how it’s looking).

Denby’s previous effort, Richard & Alice, sold over 60,000 copies and is rated 72% poisitve on Steam. He also worked on the Charnel House Trilogy as producer and developer of its middle chapter, Sepulchre.