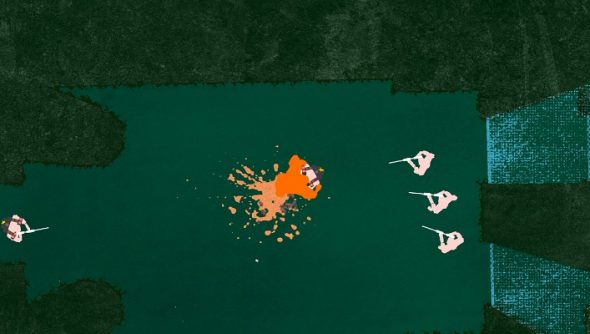 Prison breaks are frantic enough as it is, just imagine how stressful they would be if you added an ultra-violent and intelligent gorilla to the mix. In a bloody reveal trailer, Devolver Digital have unveiled new action game Ape Out which tasks players as one irate ape, hellbent on escaping from its enclosure.

If you’re on an indie kick, have a gander at these great PC indie games.

Ape Out is closer to something like Hotline Miami mashed up with a freeform jazz session, rather than the actual Ape Escape series back on the PlayStation. Upon smashing out of your cage, players will take out their captors by any means necessary, building up steam until they are on an unstoppable rampage through the corridors of the zoo.

As Ape Out has jazz at its core, the game’s music changes based on how you play. Moving the gorilla round causes a jazz drum beat to play, while killing enemies adds extra percussion to the mix. Normal captors not only explode in a cloud of blood, but play a cymbal clash on death. Shotgun-wielding jailers let off a shotgun sound and moving to different areas can cause the actual drum beat to change.

You create your own rhythm as you play, punctuating your simian slaughter quite effectively. Besides just killing your captors by punching them with your massive gorilla hands, you can take them hostage and use their weapons on their allies. You can also use the giant prison doors and guards as shields, allowing you to think out your plan of attack while bullets ping off your shield.

It’s all suitably brutal, as your ape picks up momentum and the soundtrack turns into a cacophony of drums, cymbals and explosions. Ape Out’s visuals can become equally as loud, with bright clouds of blood clashing with your bright orange ape and the single colour backgrounds.

To go along with its launch trailer, Devolver have released a short playable teaser, which lines up with the action seen in the announcement video. It’s free to download and doesn’t take long to complete, so you can see if this ape escape is for you.

Ape Out is currently scheduled for release in summer 2017.