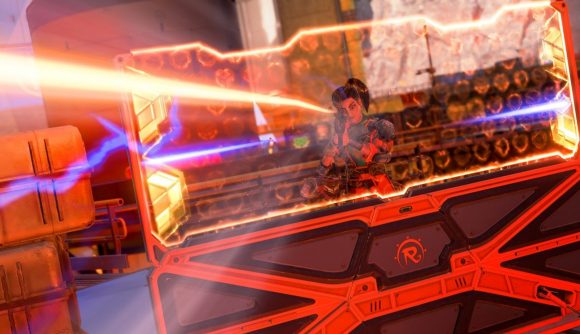 Apex Legends Season 6 is upon us, and that means the odd bug is likely to show up. Unexpectedly, however, one of those bugs is causing players to disconnect from the battle royale game. The bug occurs if someone from a particular region, like Japan, places two of Rampart‘s shields in front of each other and tries to shoot through them. Respawn has been quick to say it’s working on a fix, but one of its developers has gone on to explain the origins behind the problem and how it dates back to the first Titanfall.

“Titanfall 1 is an M-rated game,” senior designer Chin Xiang Chong explains on Twitter. “That means when giant Titans punch puny Pilots; they burst into bloody giblets. This is not okay in some regions, so we put in some script that goes ‘In these regions, play a less gory effect on the chest of the victim on the killing shot’.”

The dev goes on to explain that this script was implemented back in 2014 and has been used for six years through three games, including Apex Legends. It primarily worked without issue until the team started creating Rampart before Season 6.

“Mid-development, we found a bug where sometimes, with the high rate of fire weapons, the UI animation when the Amped Wall gets destroyed doesn’t play correctly,” Chin Xiang Chong recalls. “As a workaround, we made a change that marks the shot that would have destroyed the wall as a killing shot.

“This all works fine, except if you’re in a region like Japan where it’s not okay to have blood and guts. In those regions, the six-year-old script tries to play a less gory effect on the chest of an Amped Wall. Spoilers: the wall has no chest.”

Rampart bug: When 2 rampart tactics are placed and shot through, the player dc’s. Happened in a real game and tested it out in firing range. from apexlegends

The good news is that the Apex Legends team has already found a solution. Chin Xiang Chong says the problem has been fixed locally, and a patch will be out as soon as possible. That patch also includes fixes for other issues, though the developer didn’t say what those are.

If you’re not in one of the affected regions you need not worry, though you have gained a cool development story. If you’re looking for a new main while you wait for the patch, though, then you scroll through our Apex Legends characters guide for some timely inspiration.