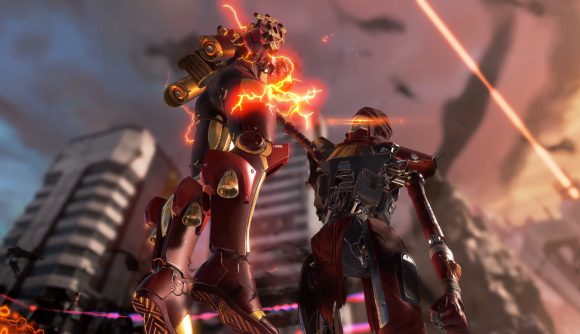 Earlier this year, Apex Legends executive producer, Drew McCoy, and lead programmer, Jon Shiring, left the battle royale game’s developer Respawn Entertainment to work on something new – and now we know what they’ve been up to. The devs have just unveiled their next adventure: a “new triple-A game development studio” they’ve formed called Gravity Well.

“I am beyond excited to announce Gravity Well – a new triple-A studio Jon Shiring and I are starting in Los Angeles!” McCoy has tweeted. On the studio’s new site, the devs explain: “Drew and Jon have been making games together for 14 years: CoD4: Modern Warfare, Modern Warfare 2, Titanfall 1 and 2, and Apex Legends. We want to keep making games that the team actually wants to play after work.”

The founders say they’re looking to build a team of about 80-85 people “at peak”, which should mean they’re able stay creative and move quickly, and explain they’re looking to “explore bold new ideas exclusively for next-gen hardware and PCs”. Sweet!

There’s no news on exactly what kind of game they might be working on or towards just yet, but it sounds like whatever they have in mind could offer something very new. “We believe the time is right to shake things up in triple-A game dev,” McCoy says.

I am beyond excited to announce Gravity Well – a new AAA studio @jonshiring and I are starting in Los Angeles! Its still early days, but if helping start a diverse and remote-native studio sounds interesting you should submit your resume at https://t.co/7mNxGk0XZE

“We are starting a studio because of how we want to make games. We want time to iterate on everything and get ideas and feedback from the whole team.”

Shiring and McCoy also say the studio will offer remote working from the very start as they “want to hire the best talent in the industry, regardless of where you live”, and that they take team health very seriously, as a “top priority”. Plus, they add, “we are anti-crunch”. There are already a bunch of roles open for applications on their site, which you can check out here.

Today, @DKo5 and I are proud to announce Gravity Well – a new AAA studio! We are building the team that will create something really fun with us. Whether you are in Los Angeles or want to work remotely, we’d love to hear from you. https://t.co/42IaVXQNdk

Looks like we’ll have to keep our eyes peeled to see what Gravity Well brings in the coming months and years. In the meantime, we have a list of upcoming PC games to keep a weather eye on – perhaps we’ll see a Gravity Well title join the list sometime in the not-too-distant future.