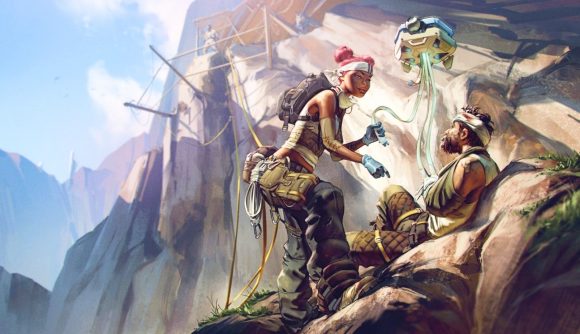 One of the Legends to get some TLC at the start of Apex Legends‘ latest season is Lifeline. She’s arguably the most identifiable healer in the game, but she fell by the wayside of the game’s meta over time. She’s now faring much better in the battle royale side of things, but she’s doing particularly well in the Apex’s new 3v3 mode Arenas.

Respawn Entertainment recently held an AMA on Reddit, with someone taking the opportunity to ask the developers how they feel Lifeline is doing after the rework. Lead game designer Daniel Klein says that she’s doing “a little too well” so far, though he also admits it’s too early to tell.

“Numerically, she’s too strong,” he says. “She wins too often, both across the game as a whole and in every single skill bucket we look at, and she’s picked very often (particularly in Arenas). Does that mean we must nerf her right away? No. Experientially, she’s so much better. No longer having the resurrection shield means it’s feasible to thirst a downed enemy being revived, but that also gives Lifeline an option to engage you while you’re otherwise occupied or when your gun’s running dry. Good play on both sides.”

Klein says that there are no plans to nerf her currently, though if it were to happen, we could see her drone heal speed or ultimate cooldown change. That, or she may get the Wraith and Pathfinder treatment and have her hitbox reduced. Klein also muses that the gold backpack might be too cheap, which is also something that helps Lifeline a bunch in Arenas.

Lifeline got several changes to her kit at the start of Season 9. She lost the ability to shied players while resurrecting them but gained the ability to pick up two people with one drone. Her drone also heals quicker, and she gets her ultimate faster with the promise of better loot.

It looks like Lifeline is safe for now, though it’s not been the same for everything in Apex. Respawn was swift to nerf the Bocek bow and Spitfire as they proved very dominant in the game’s early meta.

If you’re looking for some help with the latest season, our Apex Legends Arenas mode guide is the place to start.