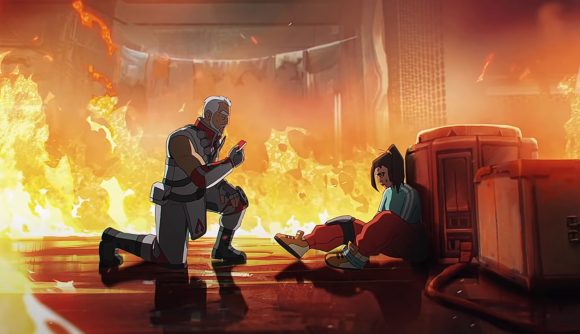 As we move closer to Apex Legends’ season 6 release date, we’ve been getting various teases of what’s to come. One of the big additions is Apex’s new character Rampart. She initially got a flashy reveal and has now gained a cinematic trailer to show off her backstory, as is tradition. The thing with story trailers, though, is that they’re ripe for the picking for lore fans, and this time around they’ve spotted a throwback to Titanfall 2.

The trailer starts with Rampart sharing a drink with current Apex Legends characters Bangalore and Gibraltar. After they leave, things quickly get messy as a group of rogues attack. While Rampart does well initially, she’s eventually thwarted and blacks out. At this point, Apex Games commissioner Kuben Blisk – who you may remember as the baddie from Titanfall 2 – shows up and utters the same phrase to her as he did to Cooper in the Titanfall follow-up.

We’ve seen Blisk pop up a few times in Apex Legends. As the game’s story goes, he’s one of the Apex Games’ commissioners, which means he can invite anyone to participate. Back when the battle royale game first kicked off, Blisk also said “they kill you, they’re better, you kill them, you’re better”, which is a spin on something he says in Titanfall 2 a fair bit.

If you’re looking to study up on some new legends ahead of Season 6, then our Apex Legends character guide may help you out. Or, if you’re like me, you can insta-lock Wraith regardless of how much she’s been changed or nerfed.

We also have an Apex Legends weapons guide to help you keep up with the meta. It changes direction pretty quickly, like a Pathfinder main who swings out of a fight they shouldn’t be in.