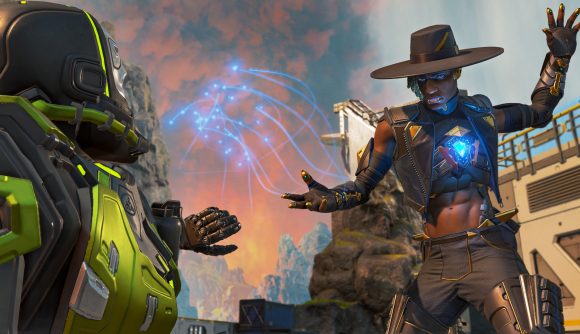 A new character gets introduced to an online game, they’re way too strong in the hands of players, and so they get nerfed back into balance. That’s the standard cycle across many games, including Apex Legends, and we’ve seen it happen with Seer earlier this month. Now, Seer is getting his expected nerf – but players feel that it’s not going far enough.

Today’s Apex Legends patch reduces the range of Seer’s passive ADS reveal, and forces you to wait a little longer when you use it. His ultimate now takes 120 seconds to cool down, rather than 90. His tactical ability takes a little longer, and won’t damage or flash enemies caught in it anymore.

But the tactical still interrupts players who are in the middle of healing or using an ability, and it still lasts for eight seconds. Those are the primary complaints players are having over this nerf, but you can go read the full extent of those for yourself over on Reddit. For Respawn’s part, the devs acknowledge that Seer is going to need further work.

“Many of you may be disappointed we didn’t touch the interrupts or reduce the eight second reveal duration,” associate live balance designer Josh Larson says on Twitter. “This is a starting point. Regardless of what the data tells us, if internal and external feedback is any indication, I imagine one of these outputs will need follow-up work.”

SEER AND THE WALLHACK META

The list looks long, but the goal here (and for hotfixes in general) is to hit pain points and degenerate play patterns without preemptively gutting the unique parts of Seer’s kit. I’ll also share my thoughts on the “wallhack meta” in general. (1/21) https://t.co/gohA6qYHa9

We might not need to adjust our Apex Legends tier list just yet, but Larson acknowledges that the devs “missed the mark” with Seer’s strength at launch, and you should expect more changes on the way.