The first thing you have to know about witchcraft is that it’s a profession guided by a strong code of ethics. When I first posted in a Facebook group for my local witch community asking if someone would cast a spell on me to make me better at videogames, the request was received with horror. Not the kind of spooky Halloween horror with broomsticks and cauldrons, but the kind you feel when your sweaty uncle brings up “the problem with millennials” over Christmas dinner. Except this time, I was the uncle.

Luckily, not everyone on the internet abides by the same moral code as my local Wiccans. A quick Google search points me to an abundance of choices for apparently potent but morally ambiguous witches – perfect for enhancing my gaming prowess.

You see, I’m not a bad Apex Legends player per se. I ping useful loot, I revive and respawn my teammates, and call out enemy positions. It’s just, well, the shooting bit that I struggle with. Even equipped with my dream loadout of a Volt SMG and a Mastiff, I rarely break the quadruple-digit damage scores, and I’ve never hit a double-digit kill count in a single game. Never.

I realise I’m exposing myself to ridicule by revealing my Apex Legends stats, but I’ve made peace with them. I started playing the game in its first week of release, driven by a love of Titanfall and a hope that Respawn’s foray into the battle royale world would do for me what PUBG and Fortnite couldn’t. And, to its credit, Respawn succeeded. I enjoy the range of characters, the lore woven into the sixty-player battles, and of course the superb gun-feel. 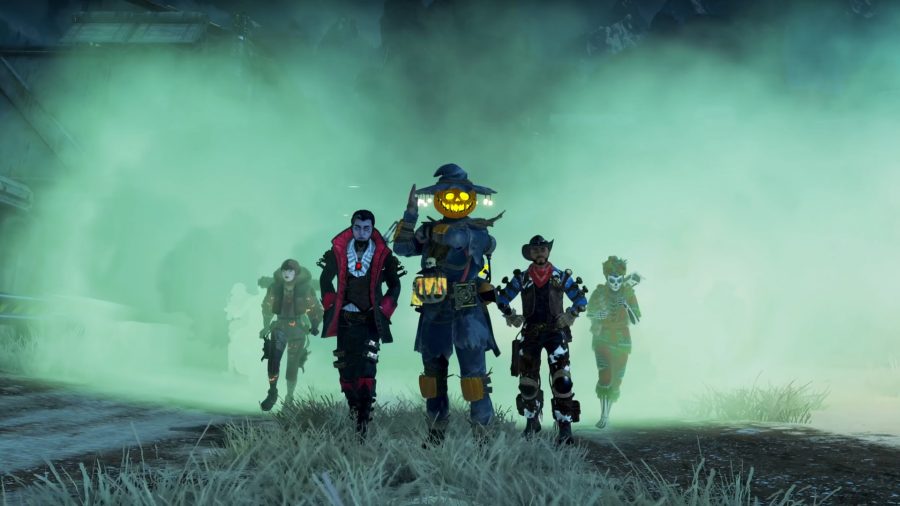 Since then, I’ve dipped in and out of the game. Other than season one, I’ve spent the most time in the two most recent seasons, five and six, and I’m very excited for a new map to explore in Apex Legends Season 7. Over 190 hours in-game, I’ve racked up a distinctly mediocre 473 kills and more than twice as many deaths, resulting in a K/DR of 0.43. But the trend is positive! In season two my K/DR was a lowly 0.1 and it has been steadily increasing, by approximately 0.1 a season.

This is all necessary background so you’ll know what kind of impact witchcraft has had on my stats, you see. Before any spells had been cast, I was feeling pretty proud of my 0.54 K/DR this season, each game slightly improving my lifetime average. My damage is also increasing, as my lifetime average is 181.74 per game, and my season six average sits at 235.56 per game. The same goes for my win rate, which across my whole playtime is 2.81% compared to 3.97% in season six. What I’m saying is, I’m improving. Just very slowly.

I know kills and damage aren’t everything in battle royale games, especially as Apex has a range of legends who can do just as important work supporting their team as killing opponents. However, I main Bloodhound, an aggressive recon legend who generally leads the pack and whose abilities are conducive to racking up his kill tally. And I’m tired of waiting for old-fashioned practice to bring me glory.

Some people would turn to an esports pro at this point, if they really wanted to get better. Many top-tier players offer training sessions during which they offer hard-earned, practicable advice and presumably create the next generation of esports legends. However, this sounds like a lot of hard work and effort on my part, so I opt to pay a witch to cast a spell on me instead. It’s basically the same thing as getting professional training, just with crystals and cauldrons and shit instead of being told how to strafe and control your recoil.

It turns out that most modern witches take PayPal

There are a lot of options available when it comes to internet spells. I decide against anything that was advertised as ‘black magick’, as even though the sites state that karma is a Wiccan concept that has no power in Hoodoo magic, it still sounds a bit… y’know. Evil. Plus, I reckon it’ll be a hard enough graft to persuade the accounts team to expense a small spell, let alone £155 for a black incantation. (As it turned out, they remained unconvinced even by the need for a simple good luck charm so my editor paid for the spell out of his own pocket – thanks to Ben Maxwell for making this piece happen.)

Due to the fact that eBay and subsequently Etsy enforce bans on the sale of “intangible objects,” I have to use a witch’s personal website to make my transaction. I naively wonder if I need to pay using toadstools, shrunken heads, or some other arcane coinage, but it turns out that most modern witches take PayPal. Which is handy. 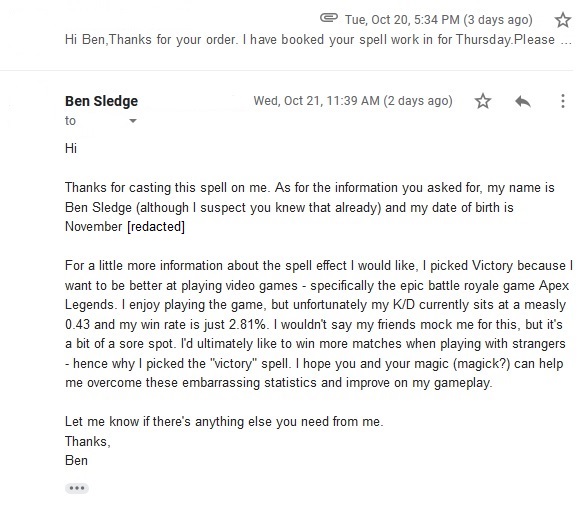 I pay my fifteen-pound fare and send my witch an email outlining the effects I’m looking for. I’ve plumped for a ‘Victory’ spell, which the website says is “designed to bring you a successful outcome” – precisely what I wanted! While the examples given would offer success for exams, interviews, or investment opportunities, I explain my lacklustre kill-to-death ratio and ask for a boost to my skills, and ideally more victories in King’s Canyon and World’s Edge.

My witch kindly books my spell for Thursday, October 22, emphasising the importance of believing that the spell will take effect. So, I go for it: I put my usual cynicism for life to the back of my mind and sincerely believe, or at the very least hope, that the spell is working.

Wraith or Wattson? Here are the best Apex Legends characters

With a weekend to myself, I knuckle down to get some serious game time in. I dive headfirst into casual matches with strangers, as I have done for the majority of my time with the game, with the power of magick behind me.

The matches certainly don’t feel any different. As is common when playing with random teammates, the jumpmaster drops in hot to Artillery or Trainyard, and we all scramble to find a weapon before any of the four or five other teams can do the same. In my first game I find a P2020 pistol and an RE-45 – the spell has clearly neglected to address my loot spawns – and loose some rapid-fire shots at a Caustic looting an adjacent building.

I jot down the damage I've done: a lowly 62, with no kills

Our Wraith is downed nearby and immediately quits out – clearly she didn’t believe that the power of magick would pull me through this fight in time to revive her. And to be fair, she was right. Whether it’s my teammate’s lack of belief or the fact I miss most of my pistol shots, we’re wiped within three minutes of landing. Pathfinder launches a string of expletives down the mic as I jot down the damage I’ve done: a lowly 62, with no kills.

I don’t need a spell to protect me from teammates’ abuse – anyone who plays games online has formed a hard outer shell already. But I feel myself improving as I play on through the weekend. I can’t be sure it’s the spell, but at least I’m enjoying myself. I play 12 matches a day on Saturday and Sunday, including a few with friends where my kill counts don’t fare much better than with strangers. After this many games, I feel myself tiring, concentration waning, and fingers freezing, so it makes no sense to continue. After all, I’m testing the power of magick, rather than that of my will.

Comparing the statistics of my 24 matches against the 126 I’d already played this season will show me if the arcane arts have produced any statistically significant improvement. I find that my average damage has gone down from 235.56 to 205.89, and my K/DR is exactly 0.50 – down 0.04 from my season average, but both still above my overall average.

However, the real victory is in, well, the victories. I win two matches at the weekend, meaning my magick-influenced win rate is an astonishing 8.33%! You may say that this is too small a sample size, or that the random matchmaking happened to place me in teams that carried me, but I think the truth is clear. It’s fucking magick. 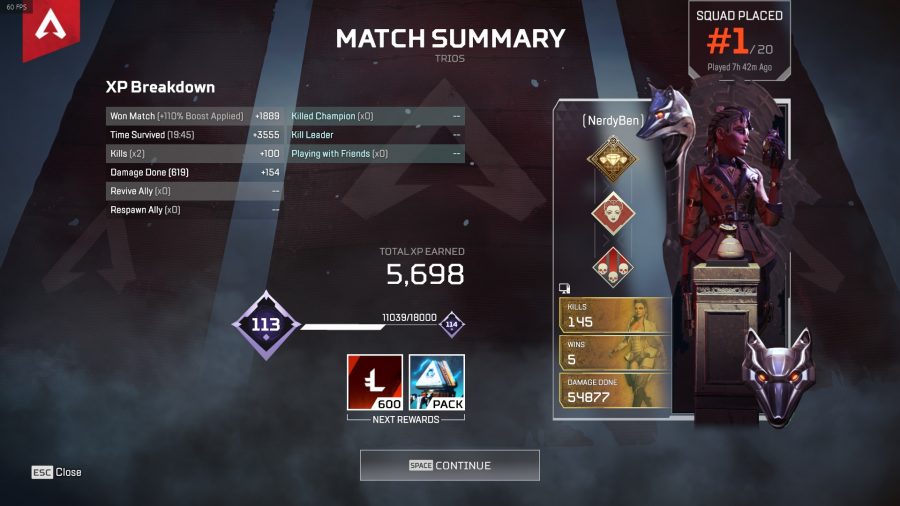 When I embarked on this quest, I was worried by the answers in the witch’s FAQ, which stated that the spells might not work if I was not “truly believing,” my “goal was unrealistic,” or “the situation is too far gone.” Fortunately, I am not beyond help, and while I would have liked to contribute more to my teams and improve my K/DR, I did tell the witch that, “ultimately, I’d like to win more matches.”

Her website does suggest that “many cases will benefit from a double or triple casting PLUS some sort of spell kit.” Perhaps if I want to improve my personal kill records as well as my win rate, I need to invest in another £80 worth of this witch’s premium – but proven – spellcasting. But for that price, I feel like I’d get more benefit from upgrading to the best gaming mouse or buying the Halloween Wraith skin where she’s dressed as witch, pointy hat and all, so at least I look good as I flail about, firing Prowler bursts into the aether where an enemy once stood.

The most important takeaway from this process, however, has been the glaring issues with EA’s anti-cheat software, and the fact that it doesn’t account for even the cheapest victory spell my editor would pay for. I fully expect esports teams to read this report – which I will reiterate is based in fact and statistics – and immediately hire a powerful witch or warlock to help their teams in major tournaments. EA must start researching and implementing counter-curses and protective spells immediately, or risk Apex Legends competitions being reduced to a spellcasting tournament rather than a test of esports prowess.

Will it work for other esports? I honestly couldn’t say. Am I sorry I have unleashed this unnatural power into the competitive tournaments of my favourite game? Of course I am. But you must know, it was done with the best of intentions – I just wanted to win.