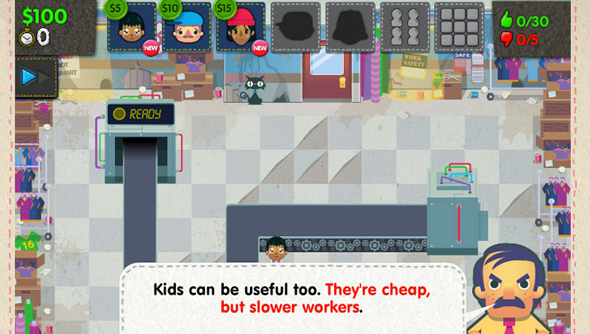 While discussing their favourite games of the past year at a GDC panel this week, the curators of Free Indie Games, Terry Cavanagh (maker of the sublime Super Hexagon) and Porpentine (the mind behind CYBERQUEEN), hit on the subject of political games.

To that, Porpentine says “throw away all definitions of what a game can be.” By creating this arbitrary ruling of what can and can’t be discussed in a game, Apple are making a ridiculous presumption about what a game is.

They don’t say why they view Apps differently, simply that they do. There is something inherent to the medium that they deem separate from other creative mediums.

“It’s a perceptual issue,” Tomas Rawlings, the developer of Endgame Syria, told us. “[People think] games = fun and they can’t be serious. It’s not true but many people, especially those who don’t play games are stuck with a stereotyped view of what games are that is years out of date. So with Apple’s App Store policy a book is a medium you can use for overt political discussion but a game is not. This needs to change.”

Apple are right in a sense; games are different from other media. They provide tools to a designer that are not available to a writer or director: they have the player become an agent within the game. That lets games say something as strongly and as fearsomely as books or films. Maybe moreso.

“As a non-linear form [games] allow things you can’t do with traditional media,” Rawlings told us. For instance, “replaying scenarios to make different choices and see different outcomes or putting the player into the position of another are two examples of this.”

During their GDC panel, Porpentine demonstrated Republia, an indie game developed by Lucas Pope, the maker of Papers, Please. Republia has you become editor of a national paper immediately after an authoritarian government has taken control of the country. If you print a paper decrying the new leaders your family will suffer. Write a pro-government paper and you play a part in swaying the people into their favour.

Porpentine says the game “is not didactic but mechanical; it doesn’t fall for the fallacy of evil individuals, but through its mechanics it criticises systems.” Pope presents you with the game systems and the stakes and simply lets you decide whether you will print pro or anti. It’s a moral dilemma but it’s so much more subtle than those often presented in games.

Republia is a political game. Like Sweatshop and Endgame Syria before it, it would therefore struggle to be approved for purchase on the Apple App Store.

Apple’s reaction is an attempt to freeze games into that stereotype of being purely for fun. Pointing to this policy change from Apple and the games that it’s aimed to penalise, Porpentine quoted J Chastain: “When we don’t ask more from games, it’s because we don’t want them to get better. We’re afraid of the world and we’d rather explore the boundaries of these fake, facile ones. We hate ourselves and we hate our bodies and we’d rather inhabit fake selves, fake bodies. We’re used to this being a lifelong habit.” Apple are inadvertently trying to instill that fear to explore what games can produce.

That’s why Apple are wrong to remove games with political content from their store. To do so is to fundamentally misunderstand the current state of the medium.