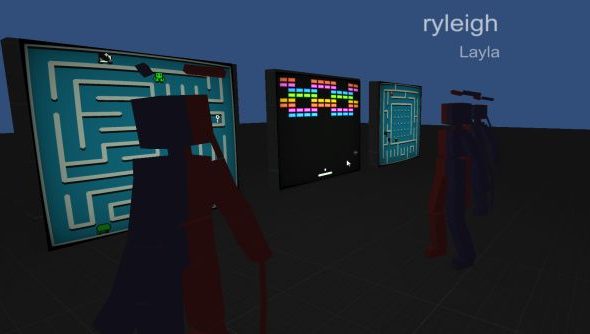 Facepunch Studios have announced yet another work-in-progress title, this time all about the arcades. Aptly named “Arcade”, the game will encourage players to create and maintain their own arcade servers in which other players can play various arcade games to earn tokens. You’ll be able to watch while people play their games in real time, and compare scores on the high score tables.

Facepunch’s Ryleigh Kotash gives a rundown of the idea behind Arcade. “Here’s the current idea for our prototype about arcades.” explained Kotash. “You explore an arcade in first person. The games cost tokens to play, and reward you with even more tokens if you do well. Use the tokens you’ve earned to play more expensive games. It’ll be exciting playing the games because you’ve got tokens on the line. Eventually you become the King of the Arcade and save it from being turned into a condo or something.

“We’re also hoping to let players design their own arcades, then host them online so that other players can visit. You’ll see people play games in real time, compete with them on the high score tables, etc.”

So why go through all the trouble for a make believe arcade room? Notalgia of course. “We’ve got fond memories of being in arcades, trying to decide what to spend our limited tokens on, watching someone get to a stage we’ve never seen before, etc.” said Kotash. “Even in our early tests it already feels cool to play a game with people literally & virtually watching over your shoulder. And it’d be even cooler with VR support.”

As barebones as it is, I can say it certainly has my interest perked. Think I’ll go play some Golden Axe now…