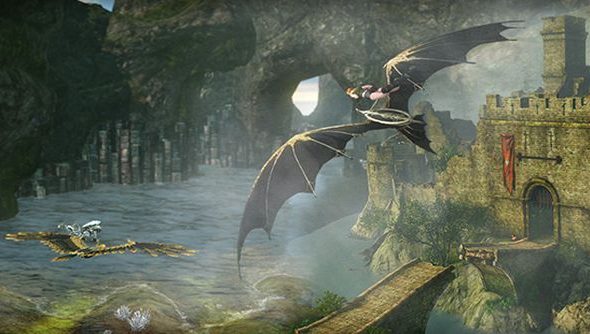 You might not know, but ArcheAge has been missing it’s endgame continent of Auroria since launch, but that’s about to change. The “Conquest for Auroria” begins tomorrow with a hefty patch filled with goodies.

Guilds will be able to compete over zones via epic castle battles; the winner getting free rein over the housing in that zone. There’s also a new dungeon, Serpentis, that’s designed for ten players. Crafting also sees some additions, the biggest being the Farm Wagon which can seriously boost your trade-running efficiency by holding up to four trade packs.

The continent of Auroria was especially created for players at level cap. Trion decided to leave it out of the initial launch, so that everyone will have a fair chance at grabbing land, capturing castles and then defending their zones.

There’ll be six new zones in total, and four of them will be available for guilds to claim, build and fight over. Those who are successful at claiming a zone – which is no easy task – will govern any and all houses built within the walls of their guild castles. They can impose things such as taxes, and even chose to destroy any house that’s erected within their influence.

You should probably start making friends with those big guilds.

A new dungeon will also be made available, this time requiring ten players to complete over the usual five. It’s got powerful items for those who can brave its depth, but its also the toughest dungeon around, so be prepared.

New quests are also in abundance on Auroria, providing a great way to earn more gold, and also level up new classes when you’re at max level. You can also build two new vehicles: the Farm Wagon and Steamfish Submarine. The former helps by having the capacity to hold up to four trade packs at a time, allowing you to make more money by doing trade-runs. The latter is more for deep-sea exploration, which I enjoyed very much in my ArcheAge review.

The patch will drop sometime tomorrow, so be sure to keep an eye out so you can join in the initial land grab.