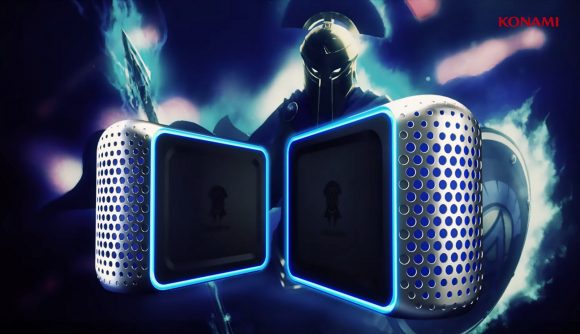 Have you ever wanted to spend over $3,000 on a $1,500 gaming PC? If so, Konami might have just the system for you. No, really, these machines are expensive – but they look pretty, at least. Japanese conglomerate Konami, best known in the contemporary gaming world for its Metal Gear and Silent Hill series, is now dipping its toes, ankles and knees into the desktop PC market, with three new Arespear gaming PCs.

The C300 is an entry-level build that should play less graphically intensive titles at 60fps at 1080p resolution, and the C700 and C700+ are fairly high-end builds that should play any modern title at or above 60fps on high settings. For the price, though, you could probably spend half as much on building your own equivalent to these systems… but would you get that bulbous chassis front-panel and Konami Arespear side-panel logo?

The Arespear C300 runs an Intel Core i5 9400F CPU and Nvidia GeForce GTX 1650 graphics card, along with 8GB of DDR4 RAM rated at 2,666MHz. The i5 9400F is a fine entry-level CPU with six cores and a boost clock of up to 4.1GHz, but the GTX 1650 is the worst-performing graphics card from the current generation, and this isn’t entirely justified by its low price tag. The AMD RX 5500 XT costs only a little more and performs much better.

The Arespear C700 and C700+, however, should be capable of some proper high-end gaming. They run an Intel Core i7 9700 CPU, an Nvidia GeForce RTX 2070 Super graphics card, and 16GB DDR4 RAM rated at 2,666MHz. This combination is usually about as high-end as you can go while maintaining some semblance of a budget. But the pricing of these pre-built PCs seems to throw out this ‘semblance of a budget’ that usually makes the 2070 Super and i7 9700 preferable over, for example, a Core i9 9900K and RTX 2080 Ti.

To be completely fair, the PCs do come with Windows 10 already installed, a 512GB NVMe SSD, and an audio card. But, to be even fairer, these don’t make up for anywhere near the extra cost of the rigs. In fact, running some quick maths, you can build your own equivalent to the C700 for about $1,620. That’s including an Official Windows 10 licence from Microsoft, a sound card, and a liquid cooler. And it’s with rounding the price of every component up to the nearest $10 mark. And it’s having not even chosen the cheapest equivalent parts you could go for (using a Samsung NVMe SSD over some cheaper and just as speedy alternatives, for example). So, for less than the C300, and for about half the price of the C700, you can make a build that’s equivalent to the C700.

As far as the difference between the C700 and C700+ goes, it looks like it comes down to the addition of RGB lighting and a tempered glass side panel… for an extra $200. We know pre-builts can be expensive, but come on, Konami.