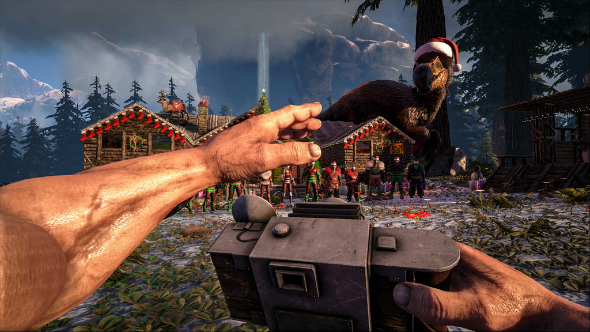 He’s making a list. He’s checking it twice. He’s gonna find out who’s naughty or nice. And then he’s going to eat them all, indisciminately. Yes, spare a thought for those celebrating Christmas in ARK’s nightmare realm of dinos, because Raptor Claus is coming to town thanks to Studio Wildcard’s latest patch 253 release, live now. Patch 253 also adds other new dinos, a camera, and caves.

Within those caves – two of them – you’ll find new challenges, new artifacts to hunt for, and a new living nightmare to be squuezed to death by.Tusoteuthis Vampyrus is a relative of the Vampire Squid, apparently, and as such loves to siphon out your blood as it’s asphyxiating you. It’s bloody enormous, too. Merry Christmas!

There are new land-dwelling beasts added to ARK, too. Troodon Magnanimus is, in Studio WIldcard’s words ‘the cleverest creature on the island’ except for humans. Unlike the sea beast above, it can’t be tamed. Instead you earn its loyalty (though quite how we don’t know) and can then use it as a scout. Therizinosaurus Multiensis, a sort of herbivore T-Rex,Pegomastax Fructarator, a tiny scavenger dino, and stinging jellyfishCnidaria Omnimorph round off the rest of the new additions.

About that camera, though (pictured above). What’s the point in a camera in this, the age of screenshots? Well, using ARK’s new object you can snap your favourite moments and print them off onto in-game canvases to create new decor items. You know, just like real prehistoric man did, when he lived among dinosaurs and rode them around.

The day belongs to Raptor Claus though, who’ll show up periodically to drop gifts such as, in WIldcard’s words, “high-end Loot Blueprints, Mistletoe, or Coal for naughty Survivors.

“Survivors can trade in Santa’s gifts for Reindeer Costumes, Candy Cane Club Weapons, Santa Hats, and if they collect enough Coal, they might even be able to summon the elusive holiday-themed DodoRex to do their bidding for a limited time!”

And that’s what you get the dinosaur hunter who has it all. Full patch notes available here.