It started with a warning – a cautionary tale exchanged over Ark: Survival Evolved’s in-game messenger. Something had attacked a raft at sea; a leviathan as aggressive as it was large, it had also made short work of destroying someone’s entire base. That’s why a group of experienced players had taken to warning new arrivals about this gargantuan presence in the waters.

Landlocked and preoccupied, I ignored these warnings and quickly put them out of my mind when I first saw them. That lasted until I built my first raft and encountered the beast myself. Skirting along the coast of Carnivore Island to the north-east of the Island map, a huge whale-like creature emerged on my left, casting jets of water over my tiny, wooden craft. I tried to escape, desperately steering towards the shore, stopping intermittently to fire a series of shotgun shells into the large blubbery hide. But it was too late. My vessel soon shattered beneath me and I was sent plummeting into the briny drink.

The creature I encountered was the Leedsichthys; a large fish known to stalk the waters of Ark: Survival Evolved. Its aspirations are simple and single-minded – to prevent players from camping out at sea for too long. It has a propensity for destroying rafts, and that’s exactly why it decided to attack me, a lone sailor on the way home from an expedition up the coast.

Since that fateful day, I’ve toyed with the idea of getting my own back, but have never put a plan into motion. Until now. Starting from scratch, I set about preparing to hunt down the beast, farming the usual spots for resources and pooling together all I have at my disposal. It’s a process that takes an entire day, but when I finally feel comfortable I push off again into the open waters, passing once again into danger… 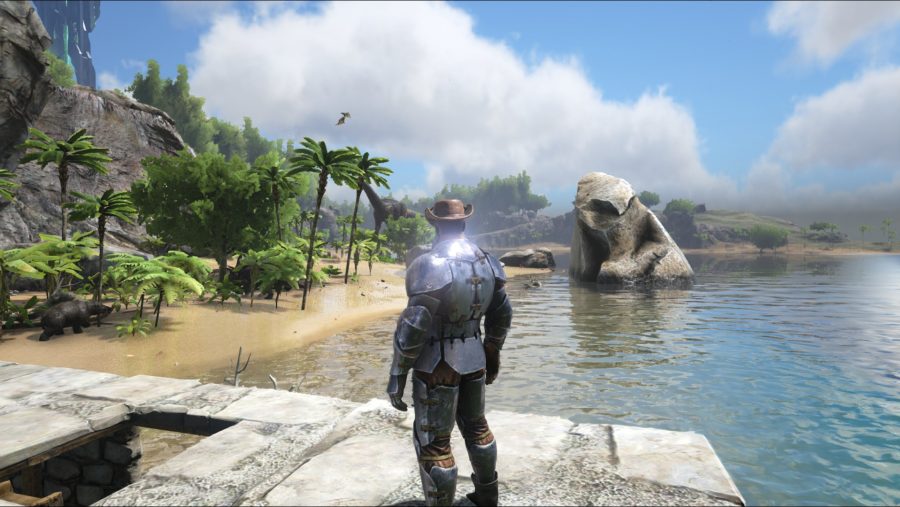 I don’t have to wait long. Cold, black eyes penetrate the surface of the water ahead of me. I anchor the vehicle and pull out my rifle. But, again, it gets the better of me. I had set up auto turrets on the side of the raft, but the Leed’s first attacks take out the electrical outlet powering them, leaving me to float uselessly without a plan B. Unable to escape, it throws its enormous mass against my raft and I sink once again into the murky depths.

Shell after shell explodes into the accursed creature from my shotgun

Reawakening back at my base, I decide to try again, even though I have less resources than before. I build another raft but quickly land myself in a different kind of trouble. As I push off from the shore, a large crocodile sneaks up and climbs aboard, thrashing about in an attempt to sink its teeth into me. I try to shake it loose, adjusting the blade of the rudder, but before I can, I hear the disconcerting sound of splintering wood and have to surrender to the destruction of even more hours of work. Yet again, I return to the coast and try to rebuild, disheartened at my continued failure. 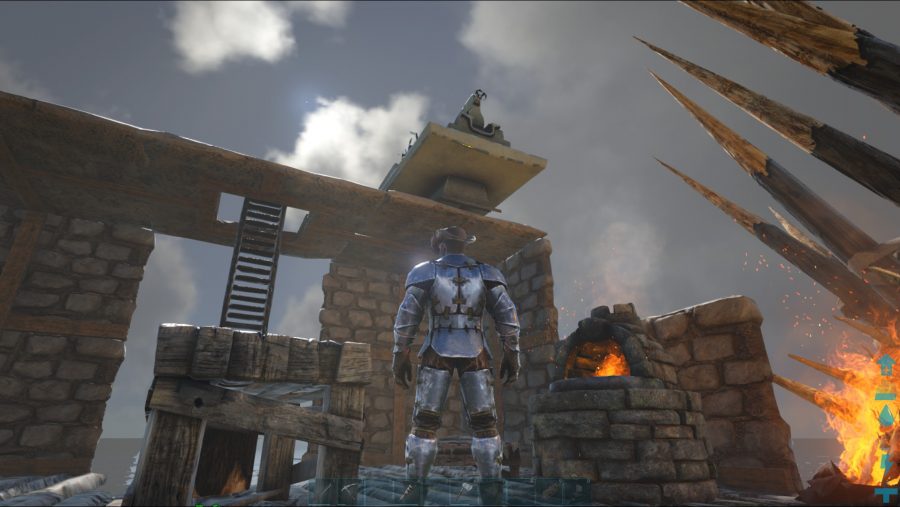 At this point, I start to feel like the endeavour is cursed. Perhaps I should just give up and live out the rest of my existence staying clear of water. Leave the beast be, commit to a life of passing on my tales to new players over grog and cooked mutton. It’s a tempting thought, but one I push it out of mind, afraid of admitting defeat too soon.

To survive in Ark everyone should construct a simple shelter. But there's a small community of players who go further. Using glitches and exploits, they create huge, complex structures beyond what the building mechanics of the game are capable of. The circle trick, for example, allows them to creature spheres and tunnels in a game that doesn't otherwise allow those shapes to be used.

I decide to go for one last attempt. This time around I will create a motorboat. It’s a demanding task that requires several more hours of gathering materials and smelting them down, but I believe it’s worth the risk. The Leedsichthys can easily catch a raft, but with an engine powering my boat I can put enough distance between us to land a few hits, and then repeat the process until it’s finally done for. That’s the theory, at least.

With a little gasoline in the generator, I steer my new, speedier craft away from the coast and into the uncertainty of those dark, open waters. It takes a while for the giant to appear, but eventually I see it crest and breach not far from where my boat is. Anxiously, I steer the ship away and equip my shotgun in my inventory. It shoots towards me, parting the water on both sides, and I respond by firing a few shots into its thick hide. Immediately, I try to move the raft away, giving me the opportunity to reload my weapon and prepare for a second attack. 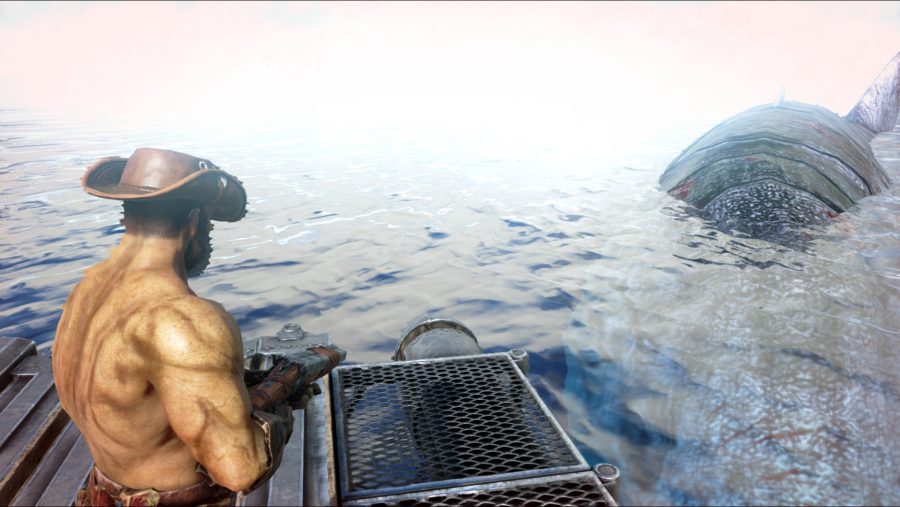 However, I misjudge the timing and the incensed beast catches up, slamming itself against the side of my boat and knocking me overboard in the process. I pull myself back on as quickly as I can and get a quick look at the serious damage the Leed has done to my boat in my absence. I shoot it again and then wrestle the boat away. But this time my nemesis refuses to follow me.

I see its enormous body dive deep into the water and realise that it’s trying to get away. Worried about losing my quarry, I spin the boat around instinctively and try to catch up to it. This prompts the beast to rear its head and make one final charge.

Shell after shell explodes into the accursed creature from my shotgun. Its hide becomes dotted with crimson. It’s close. I empty another shell. Not yet. Another. Then I pause and see that once powerful body sagging sadly beneath the waves. At last. I did it. I’ve had my revenge. 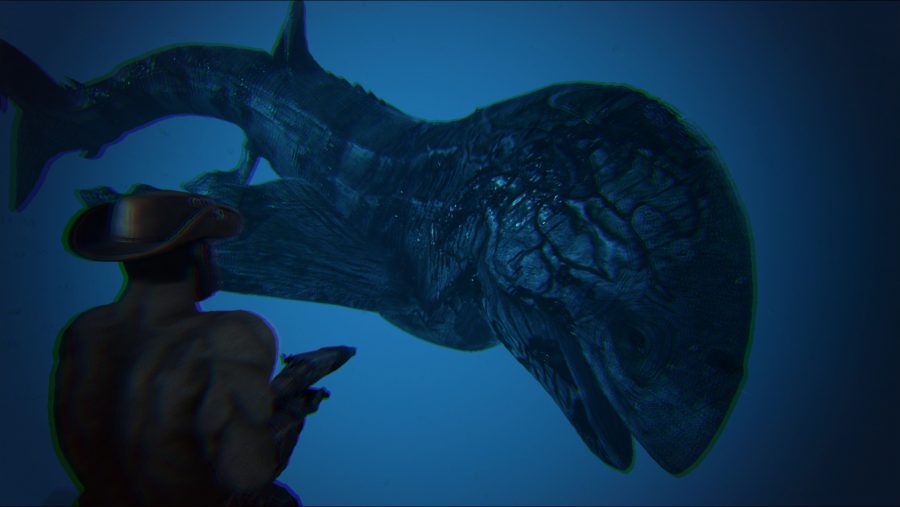 The experience of sailing in Ark: Survival Evolved is one that is so often fraught with danger. And there’s possibly no underwater threat bigger or more aggressive than the Leedsichthys. It’s not just a tool for ensuring that players don’t spam rafts or hide bases out at sea, it’s a marker of experience, separating excitable new players from battle-weary veterans.

While there is no real reward for killing the Leed, beyond a handful of fish that you can scrape from its oily carcass, I feel content in knowing that I had finally bested the obstacle that had scared me most since I started out life as an Ark player.

I return to my base and cook up the raw fish. Victory has never tasted so good.