Some people use Ark: Survival Evolved as a place to roleplay and relax – a bit bizarre given there are ferocious beasts stomping around, but it’s possible. Others view it as a kind of online gladiator arena where they can prove themselves against an increasingly difficult set of obstacles.

Ever since Ark first released in Early Access, though, the official PvP servers have been home to a third group of players: the mega tribes. These enormous alpha tribes are vying for dominance over one another across multiple servers and locations. For these individuals, Ark isn’t just a survival game, it’s an all-out war. Every day there are battles being won and lost with strategy, skill, and subterfuge.

To find out more about these conflicts and life inside these mega tribes, I reached out to their members, a task that proved more difficult than expected due to the collective secrecy surrounding them. Many of those I spoke to wanted to remain quiet to avoid exposing tribe secrets or angering anyone higher up in the chain of command.

To get around this, I contacted a number of prominent YouTubers associated with these tribes. They’re the lucky few that have been given permission to document these battles close up and were more than willing to talk about the ongoing conflicts.

MrDarkTitan is one such YouTuber. He’s currently a member of the Hydra clan, who are in an alliance with YSS and BLDX against tribes including Evil Empire and N3 (NoNoNo).

“The current war is due to two of the biggest powers in the alliance, BLDX and Evil Empire,” MrDarkTitan tells me. “They left the alliance, teamed up with each other, and started a war [against the remaining tribes]. There was nothing personal about it. It’s understandable actually. They left to have a war to spice up the game for themselves.”

But that initial betrayal wasn’t enough drama for BLDX and Evil Empire as they eventually split too, taking opposite sides in the conflict. Another well-known YouTuber in the Ark community, xFish, informs me that this second breakup wasn’t for entertainment purposes, but was due to internal issues.

“People from BLDX had been complaining about Evil Empire not helping them out in fights that much, and the other way around. So, at some point, they parted from BLDX and joined The Alliance, now called the Evil Alliance.” 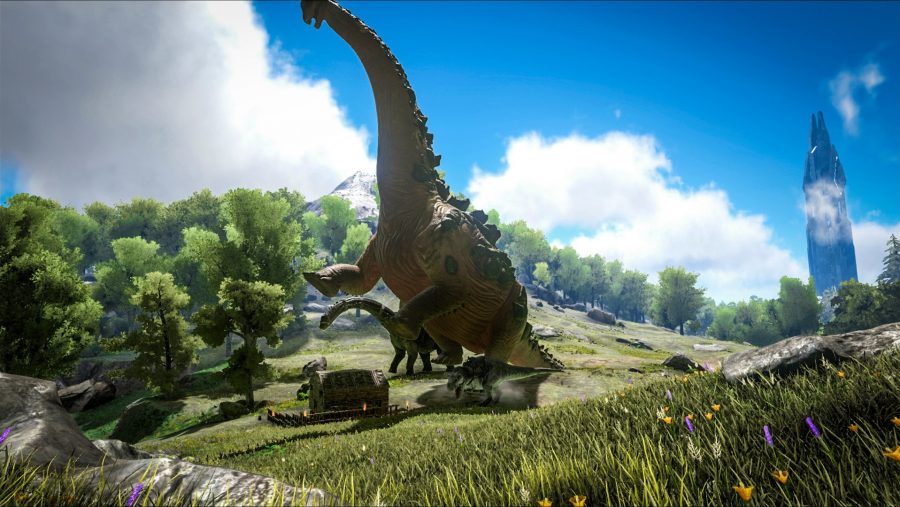 Since then, there have been a number of epic battles fought between the two alliances, in the form of server invasions. Whenever this occurs, members of both alliances will try to cram into the same server to fight. This is a task that provides its own challenge given that the official Ark servers are mostly capped at 70 players each.

“Some wars may have up to 300 players trying to join a single server to fight,” MrDarkTitan says. “Many of us find ourselves clicking ‘join the server’ over and over again, only to get the ‘server is full’ message to pop up.”

This delay creates a lot of logistical problems for each tribe such as how to transport valuable resources across to the other server in time. MrDarkTitan reckons it can take two to three hours for someone with supplies to join the server. In many cases, that’s enough time for the battle to be won by the other tribe, and so victory is often decided by resource management. Though, sometimes a tribe battle will result in a stalemate, in which the remaining combatants resort to hand-to-hand combat without turrets and dinosaurs.

While most of these conflicts are all in good fun there’s a darker side to them as well, which comes as an inevitable result of their competitive nature. You won’t go far in the Ark community without hearing allegations of cheating, usually directed at members of a tribe on the opposite side of the conflict, or a third-party who has been denied membership. These allegations range from players using aimbots, making use of exploits to get beneath enemy bases and destroy them, duping items, and even DDoSing servers to mess with their opponents.

“I always hear about players cheating or breaking code of conduct weekly,” MrDarkTitan says. “But I haven’t witnessed it myself. I can’t deny that mega tribes use cheats and exploits against each other. Although, as of summer 2018, [developer Studio Wildcard] has been enforcing its code of conduct, banning cheaters and exploiters.”

On top of this, there’s also an issue with RMT (real money transfers). Many of Ark’s most prominent PvPers tell me that they’ve turned down several lucrative offers to wipe servers and alpha tribes. This is against Ark’s code of conduct, but given that the offers tend to come from outside the game, it’s hard to imagine how Wildcard can police it.

Perhaps the most controversial event in recent memory, however, has been around a Discord bot. It was created by members of the Ark community associated with N3 to query Ark servers, like Battlemetrics. However, it also allegedly serves an alternative purpose, with information being scraped from players over to a private server, where its creators collected intel on other tribes.

Players have been questioning whether the bot goes too far, suggesting it breaks Discord’s terms of use in relation to the “attempt to obtain passwords or other private information from other members,” and Ark’s own community rules on posting personal information.

These ongoing conflicts perfectly demonstrate the best and worst aspects of the Ark community. On the one hand, it’s amazing to see so many players collaborating to create their own joint legacy and stories beyond the game’s canon. But, on the other, it’s disappointing the lengths that people are willing to go to disrupt the competition and get an edge over their opponent.