Another dinosaur is coming to ARK. The Gallimimus was apparently a giant chicken-like omnivore in real life, but in ARK it’s a massive herbivore that’s really, really good at running away. This being ARK, three survivors can mount up on a saddle, too, feeling the wind in their hair while riding the survival sim’s version of the Bugatti Veyron.

If you like punching trees, rocks and other players, as well as managing hunger, warmth and the whole ‘not dying’ thing, why not check out PCGamesN’s list of the best survival games on PC.

While the Gallimimus can’t use its claws and teeth to kill things, it more than makes up for it with speed, letting you cover long distances quickly and even jumping across massive gaps.

It’s also the only dinosaur in the game that can wear a special three-seater saddle, making it suited to recon and scouting, or even for quickly taxiing your tribe across the island.

The latest update, which is available now, also adds a whole host of other stuff, letting you SWAT up with a new spec-ops styled armour option and a fashionable cattle prod to go with it. 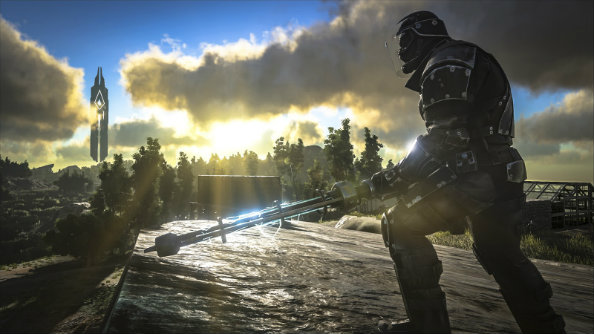 There is also a complete new tyleset that allows players to build a greenhouse with plant-growing benefits, improved save and load times, and new name tags.

ARK is currently 40% off on the Humble Store, so now’s the time to grab it if yoo’re interested.