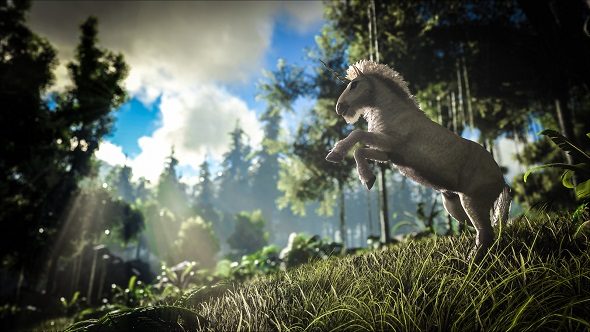 Focusing on mainly on life beneath the waves, the latest update to Ark: Survival Evolved adds new vacuum sealed underwater bases to the Tek Tier, underwater creature breeding, a substantial rework of the game’s UI, along some brand new animals to coexist with.

For those looking to test their survival skills, check out these PC survival games.

At the advanced end of the technology tree, patch 256 allows players to construct vast underwater bases using full enclosed and oxygen supplied rooms. With airlocks to control what comes in and out, there should be no worry about underwater architects accidentally flooding their structure below sea level. You can make special underwater nurseries in this update as well, with aquatic animals now laying eggs when bred with other creatures. These eggs naturally incubate in the water, so no egg handling is needed.

The Tek Tier has also received a wireless power generator which can light up any structures within range, along with a super expensive teleporter and a saddle for the Mosasaur. With this saddle, players can now equip this ocean-dwelling beast with armour and even laser cannons. A fully equipped Mosasaur would make quite the guard for your underwater hideaway.

Speaking of animals you can ride, this update adds some new four and two legged friends that survivors can mount. The Equus Magnus, as its name suggests, is a big horse that acted as a potential ancestor to the modern horse. These steeds are so large, that players can make them into a mobile crafting station with extra large saddlebags. You can also craft a lasso with these saddlebags, meaning you can leave out the dream of being a prehistoric cowboy.

Unicorns are also said to roam around as part of this update, but only one exists per island so take extra care to guard this snow white horse. If you’re looking for a more reptilian mount, the Iguanodon Vicissitudinis is a great companion for those trying to run a successful fruit orchard, thanks to its spindly arms and spike-like fingers which are built for harvesting fruit.

The Ichthyornis Piscoquus or common seagull can be tamed and used as a hunting helper, while the gargantuan Leedsichthys Conviviumbrosia acts as the biggest fish that can be found in the waters surrounding the island. While usually placid, the Leeds will attack any rafts that come into its waters so be careful when sailing around for a new fishing outpost. An alpha Leeds has enough meat on its bones to feed a whole tribe and contains a special cosmetic skin within its belly, should you successfully kill one.

The UI overhaul mainly pertains to Ark’s inventory system, with various tweaks making it much easier for players to access their whole stockpile of items. This new inventory is more streamlined and should cut down on the headaches of item management. For a full breakdown of all the changes in patch 256, check out Ark’s official website.

To celebrate the launch of this patch, Ark: Survival Evolved is also 67% off this weekend on Steam, going for $9.98/£7.58. The sale lasts until April 4 so get buying now if you want a trip to this land before time.